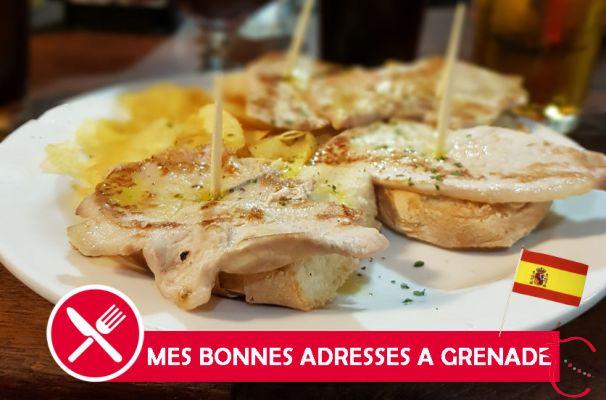 If there is one typical thing to do in Granada it is "Go for tapas" or "tapear". The tradition is to go from bar to bar to eat tapas or in any case small portions of various dishes. The tapa is indeed a milestone in the city of the Alhambra, because in Granada it is enough to order a drink for the tapa to be included in the price. So yes! Take a tour of the clubs of Granada e taste the many specialties granadinas and andalusians is absolutely a must-do on your visit to this beautiful city.

Although you will find very different tapas, some typical of all of Andalusia, in this article we will tell you which are the most traditional dishes of this wonderful province and which of course you will have to taste!

As we told in the article on what to eat in Andalusia, a type of serrano ham known as Jamón de Trevelez is produced in the Alpujarra Granadina. IS absolutely to taste! You will surely realize that it is also used to prepare some traditional dishes.

Le broad beans accompanied by Jamón de Trevélez is one of the main dishes in Granada. Sometimes it is also served with a fried egg.

The main ingredients of this omelette they are sesos (brain) and criadillas (testicles), usually pork or veal. We also add Jamón de Trevélez, chorizo, peas, potatoes and red peppers.

It is a fresh salad prepared with cod desalted and cut into pieces, orange and olive oil. You can also find it with olives, hard-boiled egg, boiled potatoes or onions.

Potatoes, green peppers, onion, egg, morcilla, chorizo ​​and jamón de Trevélez. A set of products that together form this traditional Granadino dish that is a bomb of flavors.

Riofrío is a town located about 60km from Granada. As its name indicates (rio = river), there is a river there and therefore all the ideal conditions that allow this fish (the trout) to live in these waters. Normally it comes cooked on the grill with slices of jamón de Trevélez inside of.

A great option to enjoy it is to go right to the village, in la Venta Riofrío, which is easily accessible from the motorway. You will also find it in all bars and restaurants in Granada.

The caviar (caviar) by Riofrío.

This fennel soup it is very traditional of Granada cuisine. It is made with white beans, fennel, rice, ham bone and some lean meats.

It is a very marinero dish typical of Granada cuisine. The main ingredient are the Motril anchovies, a coastal town in the province of Granada.

It is a very popular salad in the villages around Guadix. The traditional recipe calls for the vegetables to have been dried in the sun during the summer months. The vegetables used are pepperoni (which are used so dried or baked in the oven), zucchini, squash, onions and tomatoes. We also add desalted cod in small pieces, black olives and olive oil. It is a dish that is served cold. Its origin dates back to the Andalusian period of the XNUMXth century.

The Santa Fe pioneer is the sweet of Granada par excellence. Cylindrical in shape, it is made up of a sponge cake with cream and a light cinnamon flavor. It is not very easy to explain the flavor, you have to try it!

The dessert comes from a recipe that the inhabitants of Santa Fe, a town near Granada, have preserved and handed down from generation to generation.
In the 3th century there is a story of a pastry shop known as “La Blanquita” managed by XNUMX widows who gave the name of “pionono” to a pastry that had the shape of the hat of Pope Pius IX.

It's a sweet originally Arabic, typical of the province of Granada. It is made with eggs, sugar, almonds and lemon.

The suggestive Arab baths of the Albayzin: the Bañuelo and the active hammams in Granada ❯

Restaurants with local cuisine in Granada

add a comment of What to eat in Granada