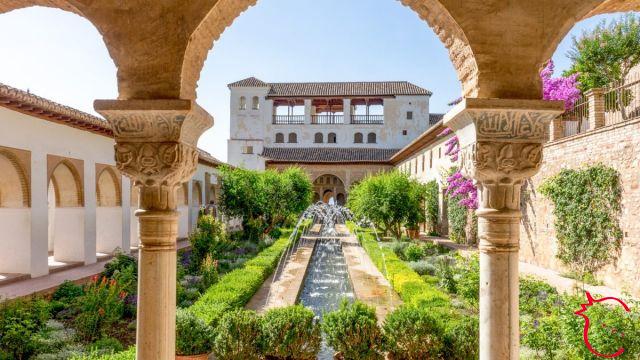 When we talk about Granada we also talk about art and culture, as well as a city with lively traditions to be discovered. The beautiful Andalusian city holds many treasures and among them are the Generalife Gardens, which have been a World Heritage Site since 1984.

Arriving on the hill of the Cerro del Sol, where the fortress ofAlhambra of Granada, there are these magnificent gardens, full of greenery and nature, of water games and beauties to be discovered. To understand the beauty of this place, think that there are those who have defined it as a real earthly paradise.

A visit to the Generalife Gardens

If you decide to visit these beautiful gardens, you will feel like a real sultan strolling through what is defined by many as a paradise. After all, the water games, the beautiful architecture that are kept inside this place, are actually royal.


Precisely for this reason, it is strongly recommended not to leave city ​​of Granada without first having visited the Arab gardens of the Generalife. To understand why they were made in such a way as to recall the image one has of Paradise, one must draw heavily on Muslim culture, which sees the garden as an expression of the celestial image.

Here, then, explains the attention that has been had in the design and construction of this small, not only botanical, masterpiece.

Who comes to visit the gardens of the Generalife he immediately notices that everything seems to be placed there for a very specific reason, which is to charm and delight all the senses, from sight to hearing, passing through smell and touch. The reflections of light, the water features, the many varieties of plants and trees, the scent of flowers, the palace: they are all pieces of a celestial landscape, which brings back to the mint l'antica Al-Andalus.

A little history of the Generalife Gardens

The Generalife, which allows you to admire the beautiful Sierra Nevada mountains in the background, is an estate that was created for the pleasure of the Nazari kings, who went there to refresh themselves. The large gardens of the estate, then, were used to supply the kitchens of the Alhambra fortress with genuine products.

In short words, the gardens of the Generalife they were created with the aim of delighting all the senses, as well as the stomach, of the kings of the Nazari dynasty.


How to visit the Generalife gardens

The solution proposed for the visit to the gardens in question also allows you to visit the entire Alhambra complex, given that, although they are two independent spaces, they have always been closely connected to each other.

When you arrive on site, this huge XNUMXth century complex appears before your eyes and, through the along Viale dei Cipressi, you can get from the Alhambra to the area where the Generalife Palace, with an adjoining royal garden.

Impossible not to notice, along the way, a series of minor gardens, among which i Low Gardens which are home to a beautiful open-air theater, where the prestigious one takes place Granada International Music and Dance Festival.


Walking further you reach the most beautiful place of the whole complex, namely the courtyard of the Acequia, which is fabulous: here one cannot fail to be enchanted by the many water games. Looking beyond its arches, moreover, you can see fabulous views, as well as from the belvedere, which offers an optimal view of the city.

Impossible not to appreciate the stuccoes in the rooms of the Palace, the courtyard of the Sultana, the High Gardens, the Scala d'Acqua, the Viale degli Oleandri and everything that populates this enchanting place.

For those who want to visit the Generalife gardens, here are the times during which it is possible:

The ticket price is 8,40 € and the visit lasts about 1 hour. It is also possible to receive a guided tour.

An opportunity not to be missed, which is located right in the Arab heart of the city of Granada, one of the pearls of Andalusia.

A desert in the province of Granada: Gorafe and the Glass House ❯

add a comment of Generalife Gardens: timetables, prices and how to get there