The Sacromonte cuevas, where gypsy flamenco is danced in Granada 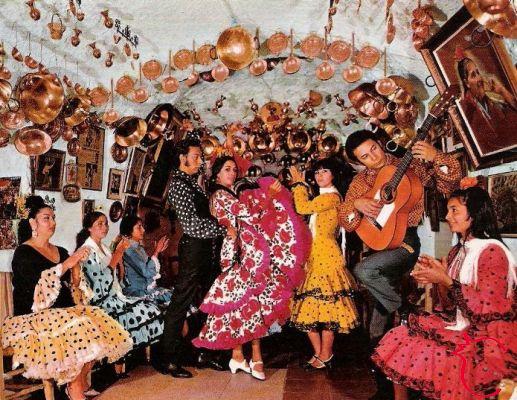 Esmeralda, the young protagonist of the famous Notre Dame de Paris, came "from the mountains of Andalusia". Victor Hugo was perhaps referring to the Sacromonte of Granada, when he wrote about the origin of the group of gypsies. In fact, this district is famous for two things (even if calling it that is limiting): the gypsies and the caves where they live.

Il Sacromonte is among the most particular things to see in Granada, and it is certainly the best area to savor the folkloric taste of guitars and flamenco, but not only: let's go and discover it together!

The caves of Sacromonte

The caves, the caves that support the entire Valparaíso valley, are the first thing that strikes you when arriving in this area of ​​Granada. These are not natural cavities, but real cave houses, specially dug into the hillside. Mostly nomadic families live here, but we can easily divide the area into two sectors.

In the part closest to the city center - indicatively from the Albayzin to the Sacromonte abbey - the Cuevas are adapted to more or less regular dwellings. This is where you will find it easily bars and restaurants obtained in the caves, and from some windows you may be able to glimpse the interior of a house. After the abbey, however, the excavated houses increasingly resemble shelters rather than houses: no services or utilities: a wilder environment, where it is also not advisable for a tourist to venture.

It is very uncertain how and when the habit of living in these large holes drilled on the mountain coast was born. The most accepted theory is that in the XNUMXth century, when Jews and Muslims were expelled from their homes, they joined the gypsies and a neighborhood of the marginalized outside the city walls.

A walk in the Sacromonte: what to see?

As for the Albayzin, also at the Sacromonte I advise you to take a nice walk, with all the necessary calm to settle in the microcosm that characterizes this neighborhood. From the center, the quickest way to reach Sacromonte on foot is, starting from New Square, skirt the river Darro keeping the Albayzin on the left, until the road curves uphill Cuesta del Chapiz.

The house of the Chapiz

Going up the Cuesta del Chapiz, you will find the House of the Chapiz, a complex of two Moorish houses from the XNUMXth century. It is considered the largest Moorish house in Granada and I recommend you stop by as it deserves a quick visit: it now houses the School of Arabic Studies. From the beautiful garden from the house you can enjoy a splendid view of the Alhambra. Go there! It is usually not crowded at all.

Le cuevas where to see the gypsy flamenco of Granada

Immediately after, turn right into Sacromonte road. This is the main route of the district, and also one of the few that can actually be traveled by tourists. You will soon realize that it is not easy to reach the higher ways. Already along this road, however, your desire for caves and gypsy guitars will be satisfied. In addition to various bars and restaurants carved into the cavities, you will encounter the Cueva Zambra the Faraona, La Rocio Cave and Cave of the Tarantos (right in front of Casa del Chapiz): ​​three theaters where you can see gypsy flamenco in Granada, enchanted by music and dances that combine Andalusian and gypsy traditions.

Attend the gypsy flamenco of Granada in a cave

Two museums real are instead the Ethnological museum of gypsy women and Sacromonte caves museum. They are both found in Barranco de los Negros street, a narrow street that climbs steeply on the left and appears as a private road, having a gate at the entrance.

Continuing to walk along Camino del Sacromonte, skirting the houses with dishes and objects hanging on the external walls, you will see the approaching Abadia del Sacromonte. With its 400 years of history, this imposing building forms with the Alhambra and the Cathedral of Granada a fundamental triangle for understanding Granada history. This abbey has been in the last centuries one of the main spiritual and cultural centers of all of Andalusia and today it continues to be a lively place that looks to the future. The tens of thousands of people who come here every year are not just tourists: they are the many pilgrims who reach this place in prayer.

The building stands in this isolated place because they were found here in 1594 the remains of San Cecilio, first bishop of the Roman city of Iliberis (present day Granada). The relics immediately attracted a large number of pilgrims so that the bishop Don Pedro de Castro decided to build the abbey. In addition to the relics, those who are called were also found Plumbeos books: lead plates with writings in a strange Arabic, which speak of legends on the apostolic and Arab origins of Christianity in Granada.

For the place where it is located, this abbey could not miss a sign linked to the gypsies. The Santisimo Cristo del Consuelo, known by all as Christ of the gypsies, is a sacred image of 1695 preserved in the Abadia del Sacromonte. Linked in particular to the nomadic people, however, it is one of the most loved and prayed images by the entire people of Granada. In Holy Week, Christ is visited by the gypsies who, with colors and music, dance and prayer, blend the sacred and the profane in a unique celebration.

Eat some granadine specialties in a free-range typical restaurant housed in a cave… it can be done? Of course yes! Here are our tips on where to eat in Granada (Sacromonte).

add a comment of The Sacromonte cuevas, where gypsy flamenco is danced in Granada