Alhambra wonder of the world 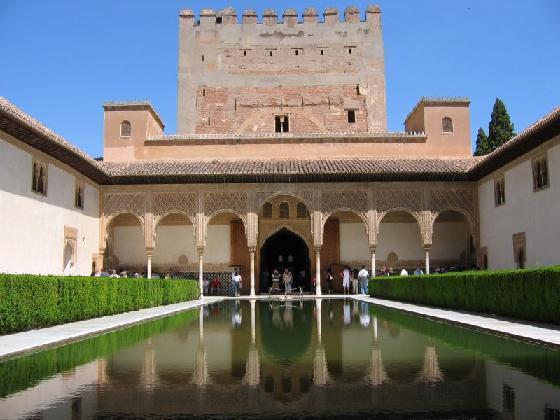 If you are in Granada you cannot miss the Alhambra: wonder of the world.

Thanks to more than 2 million visitors a year, theAlhambra of Granada it is one of the most famous monuments in Spain and among the most visited in Europe.

It is a complex of Andalusian palaces with more than 100.000 m² of surface and constitutes the archetype of an ancient Muslim palace.

Its size, variety of premises, decorations, gardens and exceptional views make it an unparalleled attraction when visiting Granada.

Not just a defensive fortress, but a real city built and enlarged following the Christian reconquest which partially modified the original architectural elements.


The great complex ofAlhambra is divided into:

Today there are numerous guided tours that lead to the discovery of the imposing Royal Palace, of the famous Courtyard of the Lions (with its central fountain), the luxurious Golden Room and the peculiar Room of the Mocárabes with decorations of great beauty.

The Alhambra in Granada also has a Renaissance section dating back to the time of Charles I. These aspects are visible in the palace of the same name and in the Plaza de los Aljibes.


Some scholars believe that the Granada style of the Alhambra represents the supreme point reached by Andalusian art.

On November 2, 1984, the UNESCO World Heritage Committee declared the Alhambra and the Generalife of Granada "Cultural Heritage of Humanity".

Today the monumental complex of the Alhambra falls within the 21 finalist candidates to be indicated as one of the seven wonders of the modern world.

Visit the official website of the patronage of Granada to find out details and insights on this fantastic historical monument.

Alhambra wonder of the world, absolutely not to be missed.

add a comment of Alhambra wonder of the world