What to see and do in Granada

Do you want to travel to Granada? It's a great idea! This great city offers great architecture and unique corners where you will live a unique experience. Visit its alhambra, its wonderful cathedral and its neighbourhoods. At ForGranaaLovers we have created a list with all the things to see and activities to do in Granada that will make your visit unique. You will love it! 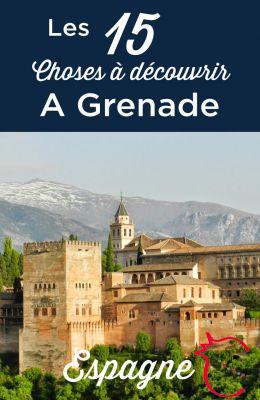 Want to travel to Granada? It's a great idea! This great city offers great architecture and unique corners where you will live a unique experience. Visit the Alhambra, its wonderful cathedral and its neighbourhoods. At ForGranaaLovers we have created a list of all the things to see and activities to do in Granada that will make your visit unique. You're going to love it!

What to see in Granada

It is easy to fall in love with Granada, its climate, its people, its streets and its monuments. A lively and young city, thanks to the presence of many university students who attend classes during the day and stroll around the facilities at night, Granada has the characteristic that remains in the hearts of those who know it: there is a Spanish saying that goes "Who did not see Granada, saw nothing" and Garcia Lorca, a native of Granada, wrote "the emotions of my childhood are all inside me. I never came out of it". Here are some of the best things to see in Granada.

The Alhambra in Granada

One of the most important symbols of Muslim rule over the city of Granada is undoubtedly the Alhambra, a monument declared a World Heritage Site by UNESCO.

The Moors needed to build a fortress to protect and guard the city and decided to do so on the ruins of an ancient citadel called Alcazaba, giving the name Al-Qal aal-Hmbra to their new fortress, which in Arabic means "fortress". red". The name is probably inspired by the colour of the sun-baked bricks with which the outer walls of the fort were built. The Alhambra (name adapted to the Spanish language) was originally a military citadel, but during the reign of Yusuf I it became a palace full of wonderful courtyards, fountains and gardens, made all the more beautiful by the truly amazing play of light and shadow. The strong contradiction of the Alhambra is striking: rigid military construction on the exterior and delicate and elegant structure on the inside.

In Granada, the beauty is endless: right in front of the Alhambra there is another independent palace, the Generalife, surrounded by wonderful hills and splendid gardens, a kind of oasis of peace and relaxation of the king.

The name of this monument comes from the Arabic words Yanat - al - Arif and means "garden of the architect", but not just any architect, the best and most powerful of all: God. The gardens of this structure date back to the '300 and are truly exceptional: arabesque, elegant and colorful especially in spring when the bright colors dye all the flowers. In summer, when the heat of Andalusia oppresses, it will be wonderful to reach the Scala dell'Acqua and dip your hands in the water that slides down the handrails.

Dar-al-Horra Palace or the Monastery of Santa Isabel in Granada.

This splendid structure was built in the 15th century on the remains of a destroyed palace of King Ziri. This building is very interesting because it is the only one, among those that were present in the characteristic Albayzin quarter, which has been preserved and has maintained its original appearance. The name Dar - Al - Horra, House of the Honest Woman, seems to be inspired by the mother of King Boabdil, the last Arab monarch in Spain. After the conquest of Granada in 1492 by the Catholic Monarchs, the Arabs ceded the palace to the royal secretary Hernando de Zafra. Later Queen Isabella decided to found the Royal Convent of Santa Isabel here. The Palace belonged to the religious order until the twentieth century, until it was acquired by the government: currently the Dar - Al - Horra is listed as an Asset of Cultural Interest.

The Albayzin district is a UNESCO World Heritage Site due to its extraordinary architectural uniqueness. Founded by the Moors, it takes its name from the bayyasīn, that is, from the city of Baeza.

At its peak it had 60,000 inhabitants and 26 mosques. The intricate system of streets, courtyards and flowery balconies remains intact, making it the most characteristic and authentic place in Granada. The most important monument of the neighborhood is the Church of San Salvador, Mudejar style, built in the sixteenth century on the old mosque of the Albaicín. In front of the church is the viewpoint that bears the same name and from which you can enjoy a splendid view of the fortress of the Alhambra. Also not to be missed are the Roman Baths and a passage under the Arco de la Pesas, a small gateway in the defensive walls of the quarter.

The Cathedral of Granada is considered the greatest expression of the Renaissance church in Spain. The Catholic Monarchs founded the cathedral in 1492 and wanted it to be an imitation of the Gothic model of the cathedral in Toledo. In 1518, Diego de Siloé was given the task of designing the cathedral and devised a new church plan in the Spanish Renaissance style. Almost 200 years later, in 1704, the work was completed, but only one of Siloé's two towers was built, and only partially: the tower should have been 81 meters high, instead it was finished at 57 meters. The main façade, on the other hand, is a masterpiece of baroque art by Alonso Cano in 1667.

The Royal Chapel of Granada

In a building next to the Cathedral is the Royal Chapel, commissioned by Isabella and Ferdinand. The two rulers agreed, by mutual consent, that after his death his remains should remain in Granada.


This city was an important symbol for them, the place where the Reconquest of Spain and the expulsion of the Moors had been completed. According to their will, the remains of the two sovereigns and of their unfortunate daughter, Giovanna La Pazza, and those of her husband, Filippo il Bello, are kept here. Filippo il Bello. In Sacrestia there is a small museum where you can admire Ferdinando's sword, Isabella's scabbard, the silver crown. Not to be missed is an in-depth visit to the small but significant collection of personal art of the sovereigns: you can admire a Christ by Perugino, the Prayer in the Garden by Botticelli, many paintings including a Memling and an uncertain Van Der Weyden.

The Arab baths of Granada

The Catholics considered the Arab baths to be equivalent to brothels and places of prostitution, although this was not the case at all. Here the Moors of Granada met to talk about religion, indulge in water, talk, relax, have a massage and a haircut, with a rigid separation between men and women.

Despite the bad reputation, the Arab Baths of Granada have survived almost intact the meticulous work of destruction of the Moorish symbols carried out after the Reconquest of Spain and the expulsion of the Muslims. El Bañuelo is therefore worth a visit because it is one of the few remaining Arab baths in Spain. The baths are located on the banks of the river Darro, on the opposite side of the Alhambra. It is accessed from a small house built over the baths after the Reconquest. There are three large spaces (cold room, central room and hot room), and a central courtyard with a bathtub.

Although less famous than other European science parks, the one in Granada is undoubtedly one of the best. A mix of learning and fun designed for children but which also fascinates and teaches adults.

We started with a Journey in the human body where we discovered all the secrets of human DNA, went on to Perception where we played with lights and sounds and then to the Explore Room, dedicated to the little ones. In the Science Park of Granada there is a Planetarium with a capacity for 83 people and a celestial vault of 10 meters in diameter on which 7,000 stars are projected, the limit of human sight on a clear night.

What to do in Granada

Where to stay in Granada

Andalusia is one of the most popular tourist destinations in Europe, especially in spring and autumn. A little less so during the summer when temperatures in the cities can reach 45 degrees Celsius.

Granada has a long tradition of tourist hospitality, with hotels, B&Bs and apartments for rent. The available structures are about 400, with very low prices, you just need to be satisfied. You can find hostels and rooms for rent from 20 euros a night but you have to accept some compromises in terms of comfort. With 50 euros a night you can have an excellent 3 star hotel in the center of Granada and with a little more even a luxury accommodation.

The choice of where to stay in Granada can be very varied. In fact, there are different accommodations available and in general it depends on your personal taste and above all on your budget.

You can decide to stay in a luxury hotel overlooking the Alhambra, in a hotel in the historic center, choose a comfortable apartment in the narrow streets of the Albayzin district or in the Jewish quarter of the Realejo, choose a room with Airbnb or Couchsurfing systems. Or try the different hostels and B&Bs in the city.

Below we list a series of links to help you choose the most suitable accommodation for you.

Discover the sleeping opportunities in Granada. A selection of hospitality facilities such as hotels, hostels, B&Bs, hostels, apartments.

add a comment of What to see and do in Granada