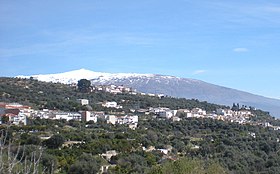 If you live in Granada or are visiting the Andalusian province we suggest you visit Albuñuelas, and its wonderful Sierra.

Albuñuelas is a Spanish municipality of 1.156 inhabitants located in the autonomous community of Andalusia.

Albuñuelas is located to the left of the Santo River gorge, at one end of the Sierra de Almijara. Thanks to its height, splendid landscapes can be admired from this city.

The visitor can practice different types of sports related to nature such as paragliding, canyoning, caving, mountaineering or hiking.

There are also two game reserves extending over 7.500 hectares. The presence of lead, nickel and cobalt mines is also interesting.


Do not miss Sierra de las Albuñuelas where to spend enchanting moments in places like the Fuente del Cañuelo, a town located 10 kilometers from the city on the road that connects it to Almuñécar.

A legend has it that sometimes at sunset when returning from the mountains, a strange light appears to travelers, called the "Light of the Rambla", which accompanies them to a mill located at the entrance to the city.

This city celebrates its popular and patronal festivals in August in honor of Nuestra Señora de las Angustias. The celebrations begin on the 15th with the procession in which the statues of San Sebastiano and the Virgin are carried around. During the day there is no shortage of sharing games and with the arrival of the night you can watch a fireworks show.

According to the stories, the city experienced a happy era during the Arab period and it is said that its inhabitants exerted a strong resistance before the reconquest of the Catholic Monarchs.

With the repopulation of the Christians from La Mancha, Albuñuelas reached its peak, as evidenced by the documents found in the archives and in the magnificent facades of some houses.

In 1884 an earthquake caused 102 deaths and the total destruction of 362 buildings. Despite the time that has passed and the repairs made, the devastation of the earthquake can still be seen in some of its buildings.

Agrón a historic village in the province of Granada ❯

add a comment of Albuñuelas and the Sierra de las Albuñuelas