The suggestive Arab baths of the Albayzin: the Bañuelo and the active hammams in Granada 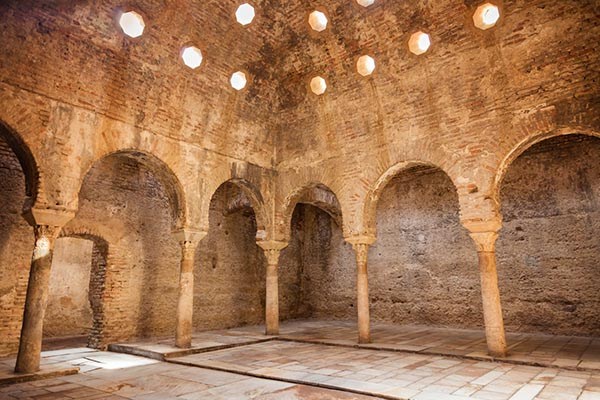 Restored a century ago, from 1918 on Bañuelo di Granada has been declared a national monument. If finding the remains of Arab baths in Andalusia is certainly not a difficult task, it is more difficult to locate a well-preserved one like the one you can visit in Darro Race a Granada.

What is an Arab bath

Given the history of Granada, it is not surprising that here, as in Ronda, Cordoba and the rest of Andalusia, there are historical and cultural remains of the Moorish era. Among these, the Arab baths have come down to us in the version of places of relaxation, where among warm pools and clouds of steam you try to dispel the stress of modern life. But which the original function of these places?


THEhammam it is the thermal complex where Muslims perform Ghusl and Wudu - respectively major and minor lavacro - to achieve Tahara, spiritual purity. All this in the Islamic tradition is necessary in order to be able to fulfill the daily prayer, which every Muslim must pray five times a day. As was already the case with the ancient Romans, the baths acquired an ever increasing one social function. Taking care of one's body and relaxing thus became the context for meeting, talking and concluding business. Water and its use fascinated the Arab peoples who discovered what was left in North Africa by the Byzantines, being used to arid regions, so that they took an example and made it an integral part of their culture.

When we talk about the Arab bath we should not think of natural hot sulphurous spas, not present in Arab countries or in this area of ​​Spain. The water therefore had to be heated and the boilers they were the center of the hammam, where the water was poured boiling into pipes that carried it to the different rooms. One room was usually dedicated to massage of the bodies, one to the hair removal - yes, it was a very widespread practice, both among women and men, and it took place using a special pasta called nura - and one to relax and refresh the guests. Access to the spa has always been separated between men and women. However, there were not always different rooms and this almost always led to the division into time slots for separate entrance according to sex.


Visit the Bañuelo of Granada

If you come to Granada, you will surely visit the Alhambra, inside which the remains of some Arab baths are preserved. Unfortunately, they are all incomplete. With a short stop on your tour of the Albayzin, however, you can visit the most important and well-preserved Arab baths in Spain. The reason why most of the Arab baths were destroyed by the Catholic Monarchs, is that these places had a reputation comparable to that of the brothels. In this case, however, a house was built to cover the bathrooms, so much so that even now it is accessed from the same house.

Known since the late XNUMXth century as Bathtub, its real name would be Hammam al-Yawza o Walnut Bath and owes the diminutive to the comparison with the royal baths of the Alhambra, originally larger and more sumptuous. Entering the building, we immediately find the Cold Room, followed by the Warm Room, larger and decorated with arches, until we reach the Hot Room: the latter in all the Arab baths is the main room. Arches and pillars, marble decorations and star-shaped holes on the ceiling they combine beauty and elegance with the functionality of the spa. The holes in the ceiling, so characteristic, they had two very important functions: to illuminate the room and ventilate it, allowing the boiling vapors to escape. This implied a continuous need to feed the boilers and pump hot water, but the continuous exchange of vapors ensured greater hygiene.

The Bañuelo is located at Carrera del Darro 31, and is easily accessible walking da New Square, one of the main squares of the city. Alternatively, you can get there by bus with lines C1 and C2, which make the Bañuelo stop.


Entrance to the Bañuelo costs 5 € Monday to Saturday, while it is free for all on Sundays. With the same ticket it is also possible to visit the Casa Horno de Oro and the Palacio Dar al-Horra (see here). The opening hours are as follows:

If the Bañuelo is now a relic of the past, the tradition of the hammam in Granada and elsewhere in Spain it has continued to the present day, obviously evolving in the structure as well as in the functions, which today are exclusively of relaxation and well-being. So even today it is possible to try the experience of the Arab bath: I recommend that you live this experience at theHammam Al Andalus, the main spa still active in the city, a sort of spa in Granada, but housed in a beautiful Moorish setting! The Arab bath is located in Calle Santa Ana 16, not far from Carrera del Darro: just cross the Cabrera bridge And that's it!

The modern hammam allows you to take advantage of different services and experiences, with prices accessible to more or less wealthy wallets. Here are the proposals of Hammam Al Andalus:

add a comment of The suggestive Arab baths of the Albayzin: the Bañuelo and the active hammams in Granada