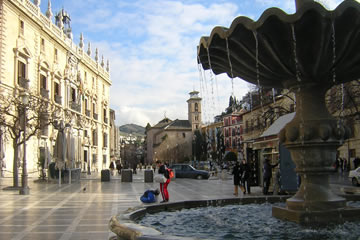 The Plaza Nueva in Granada despite its name, is the oldest square in the city and is located between the city center and the Carrera del Darro.

From this square it is possible to climb up to the Alhambra, sit on one of its terraces after visiting the famous architectural complex, visit the Arab quarter of Albayzín, crossing the picturesque Carrera del Darro or choose the route through the streets that lead to the Calderería and the numerous tea rooms.

Around the Plaza Nueva there are several buildings of importance, such as the Real Chancillería (Superior Court of Andalusia), the Casa de los Pisa or the lively Calle Elvira, a street with many clubs and tapas bars.


Previously, the Plaza Nueva was one of the most important centers of the city: the bulls ran and competed in numerous tournaments and demonstrations.

At first, the Plaza Nueva in Granada only reached the Cuesta de los Gomérez, then the project was expanded, completed in 1515 by Miguel Sánchez de Toledo and later extended to the modern Plaza de Santa Ana.

Today this important place is and continues to be a real meeting place for life in Granada. It is a good place to stay in a hotel or apartment, especially for young people, or to linger in the sun and read a good book.

To reach Plaza Nueva it is possible to take the tourist buses C1, C2, or the urban ones (SN1, SN4 or LAC) which leave you at the beginning of gran via.

A must for your stay in the Andalusian city.