From Seville to Granada: recommended on the road itineraries and connections available 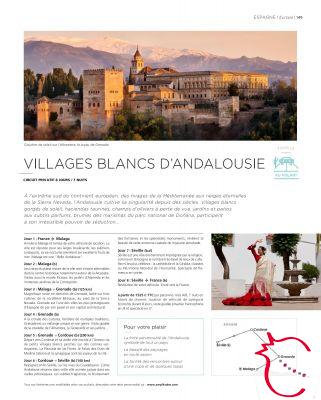 Today we are once again talking about two of the most beautiful cities in Andalusia: Seville e Granada, but we do it with a view to organizing a tour on the road that includes both of them. If Seville is elegant and refined, Granada is magical and fairytale… both to be visited calmly, both to be admired in every corner. If you have 6-7 days, I would suggest you spend 2 or 3 days in Seville, and (at least) 2 to Granada - one of which is dedicated almost exclusively to visiting the Alhambra - e 1 or 2 days for the shift between the two cities. Starting from Seville, in fact, you could reach Granada making a few stops to explore some charming towns along the way.


You can decide whether to do the proposed itineraries in a single day starting early from Seville and arriving in Granada in the evening, or if it is worth stopping in one of the intermediate locations recommended for the night, just as we like to do; in the second case, you will find indicated what we think is the best town for overnight stays.

Seville it is a city of the air aristocratic full of monuments and attractions that cleverly mix style Mudejar with the Gothic, Renaissance and barocco. Ancient and modern come together just as the hectic everyday life is nourished by centenary traditions: flamenco, processions, tapas and ferias are essential elements of the soul of Seville.

Among the main attractions to see in Seville, it is useful once again to indicate the main ones:

And of course, you shouldn't miss an evening dedicated to a flamenco show in Seville in a tablao, a place where, between tapas and tapas, you can be enchanted by live flamenco dancers and musicians.


Advice on where to sleep in Seville

With his Arab soul, Granada is a pearl of Andalusia which, over the centuries, instead of losing its charm, it has grown stronger, attracting thousands of tourists from all over the world every year. If the Alhambra remains the unmissable attraction of the city, do not miss a walk through its most important neighborhoods.

Among the things to see in Granada we mention:

Advice on where to sleep in Granada

Distance between Seville and Granada

Seville and Granada away 214 kilometers accessible by car in about 2 hours and 20 minutes via the A-92. If you travel by public transport, please note that Seville and Granada are connected both come on Renfe trains that come on bus of the company Alsa.

Here are some possible ones itineraries by car with interesting towns to see along the way. We hypothesized the trip from Seville to Granada, but if you have different needs, the itinerary can be easily reformulated with departure from Granada and arrival in Seville. In the latter case, the best towns to stop for a night are Antequera or Priego de Cordoba, although not far from Granada.

Possible routes from Seville to Granada

By car, it will take you about 2 hours and 20 minutes. The direct route is the A-92. This choice is practically obligatory for those with little time and he wants to dedicate it all - understandably - to the two cities.

If Seville and Granada are the flagships of Andalusia, Cordoba is not far behind. A possible itinerary is precisely the one that plans to visit the center of Andalusia, also making a stop in the wonderful Cordoba. In our itinerary and in this article we have given tips, ideas and advice for visiting these three pearls of southern Spain. But be careful, because Cordoba deserves at least one night and therefore to do this tour in our opinion you will need to have at least 7 days available. As you can read in the article I suggested, in addition to Cordoba, you can visit other towns full of charm such as Carmona, Almodovar del Rio, Priego de Cordoba and Montefrio.

This itinerary extends for 279 kilometers passable in about 4 hours. If you decide to enjoy this part of Spain by exploring it at your leisure you might stay overnight in Priego de Cordoba. If, on the other hand, you prefer to do it in one day, calculate the distances and hours to devote to each town well because you may not have enough time to visit all three.

This itinerary extends for 273 kilometers that can be covered in 3 hours and 42 minutes. Each intermediate stop has its own charm but, given the choice, I would spend a night in Antequera. An overnight stay will allow you to have time to visit them calmly without running from one place to another.

The twin cities with Granada ❯

add a comment of From Seville to Granada: recommended on the road itineraries and connections available