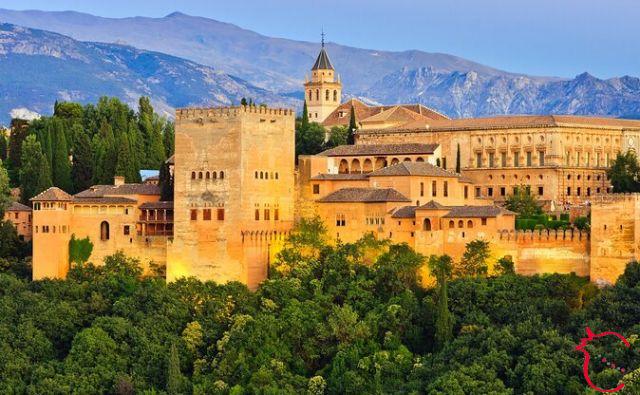 Thinking aboutAndalusia one of the first images that comes to mind is that of the splendid Alhambra in Granada. Immediately afterwards the thought flies to the long beaches of golden sand and the nightlife, a Spanish term that we all use in Italian to indicate pure fun. Making reality what the mind shows us in fragmented images is simple: it will be enough to organize an itinerary that connects it moresca Granada with the spa Malaga and its beaches.

In this article you will find our tips for visiting both Malaga and Granada distance and main links between the two cities and, while moving between one and the other, possible routes to see the hinterland with its beautiful villages and the most important coastal towns, just as we did in the case of the Malaga-Seville combination.

Distance between Malaga and Granada

Between Malaga and Granada there are 131 kilometers, which can be traveled by car in about 1 hour and 30 minutes via the A-92. The road is smooth and runs through the hinterland.

Malaga is the capital of the Costa del Sol and its sunny beaches make it a popular tourist destination, especially in summer. The fervent cultural life of Malaga combines with its main monuments: the city is able to offer tourists both entertainment and history, art and architecture. We talked about it extensively in the article what to see in Malaga.

Malaga also has an extra point in its favor if you are planning a tour in Andalucia: an important international airport with various air connections between Malaga and Italian cities. We talked about this in the article flights to Malaga.

Among the main attractions of Malaga we find:

Malaga deserves it a two day stay in which to alternate the pleasures of the sunny city beaches with the visit of the main monuments and places of interest in the city. Spending a night in one of the hotels in Malaga will allow you to discover the Malagueña nightlife for which the city is renowned. If you really don't have time to stay overnight, I still recommend that you dedicate it to it at least a full day.


Advice on where to sleep in Malaga

Granada is one of the most famous cities of Andalusia thanks to the Arab presence that over the centuries has changed its structure and conditioned its soul. Its monuments (first of all the Alhambra!) But above all the air you breathe in the streets of the historic center attract every year thousands of tourists, making it a very busy city but no less fascinating.

Although the list would be longer, among the monuments and must-see places in Granada we find:

For some time now they are finally there air links from Italy to Granada. Unfortunately at the moment there are few and the two main airports to reach Andalusia from Italy remain Malaga and Seville.


Look for a flight to Granada

The city of Granada (with its beautiful surroundings) deserves a stay of 3 days, but if that's not possible, consider spending minimum two full days in the city, one of which will be almost entirely dedicated to the Alhambra.

Advice on where to sleep in Granada

Connections between Malaga and Granada: bus and train

As regards the public transport, Malaga and Granada are well connected viabus: la ALSA line connects the Malaga bus station (Paseo de los Tilos, 21) with the Granada bus station. There are over 20 daily routes. The bus and the fastest way to reach Granada from Malaga by public transport. The journey takes 1 - 1 hours depending on the departure time, but I recommend you read our Andalucia by bus page to find out more about the tickets and the duration of the trip.

ALSA cars also connect thereMalaga airport with the bus station of Granada: in the latter case, the journey takes about 2 hours and 30 minutes.

Currently they do not exist direct train connections between Malaga and Granada. The only railway solutions involve changes in intermediate towns or train-bus combinations, bringing the duration of the journey to over 4 hours. Read our Andalucia by Train page to find out more about tickets and journey times.

Sure! We recommend hiring a car in Malaga and venturing on the road to discover unmissable secret corners of the central region of Andalusia.

Tips for car rental in Malaga

Itineraries between Malaga and Granada: recommended stops for an on the road

The fastest journey from Malaga to Granada by car it is the one along the A-92, which allows you to reach the Moorish city par excellence in about an hour and 30 minutes.

However, we want to suggest two alternative routes that allow you to discover other towns along the way that certainly deserve to be visited.

In total there are about 170 kilometers for about 2 hours and minutes 30 of travel to do in two days.

This is the second recommended itinerary to cover the distance between Malaga and Granada: the route is 142 kilometers. The total travel time is 2 hours and minutes 40. With the two stops planned, perhaps one in the morning and one in the afternoon, it is possible to do the entire itinerary in one day and arrive in Granada in the evening.

add a comment of From Malaga to Granada: recommended itineraries and connections between the two cities