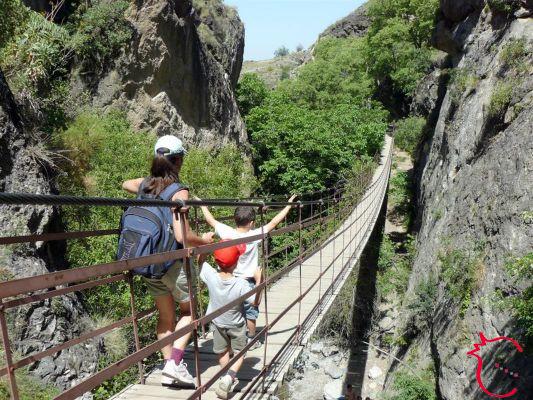 An escape from Granada to spend the day surrounded by nature. Los Cahorros route 15 minutes drive from the city of the Alhambra!

Monachil is a village located about 8 kilometers south-east of Granada. In this place we find Los Cahorros, a natural area with breathtaking landscapes ideal for trekking or climbing.

A place where peace and tranquility triumph over the traffic of the capital. A good opportunity for an escape from the city to spend the day immersed in nature.

The Los Cahorros route (about 8 km) winds along the Monachil River, which originates from the Veleta (the 2nd highest peak in the Sierra Nevada and the 4th highest in Spain).


This river is the "great architect" of the impressive landscape: high mountains carved by its waters for centuries. Visitors can walk between the walls of the mountain that the Monachil River has managed to shape over time.

To get to Los Cahorros, you leave the village in the direction of El Purche and you can leave your car at the El Puntarron bar (about 500 meters).

From here begins a path that crosses an area with fruit trees that leads to the road. You will come to a crossroads called Los Regenerales and you can take the path to Los Cahorros Altos or Los Cahorros Bajos. The advantage of climbing Los Cahorros Altos is the view from the top of the river.

On the way the mountains combine with the river and waterfalls.

Of great interest are the bridges suspended in the void that must be crossed from time to time to continue the route. One of the bridges over the river measures 63 meters. It was built about a century ago with ropes and in 1970 it was reinforced for added safety.

In some places the path becomes a bit more challenging, such as the passage from the Grotta dei Piccioni (one of the most beautiful points encountered on the way).

The route is quite easy, but remember that in some places it is necessary to climb under the overhanging rock along the side of the gorge. There are metal handles set into the rock to help you in the passage. The path can be followed to the La Vega Electric Station and then back.


Los Cahorros has its own charm in every season. Autumn gives it a special touch of color, but it's also nice to go in the summer to cool off a bit, perhaps taking a walk along the river.

To get to Monachil by car, take the Gr 3202 road towards Barrio de la Vega and from there to Monachil. The car can be left in the El Puntarron bar area.

If you want to take the bus from Granada, line 183 goes to Monachil (not to be confused with the one that goes to the Barrio de Monachil), which leaves from Paseo del Salón (on the banks of the Genil River). You have to get off at the last stop and from there go up the road along the river.

Tickets for the Alhambra

Segway tour Granada: a new way to visit the city

add a comment from Los Cahorros route 15 minutes from Granada