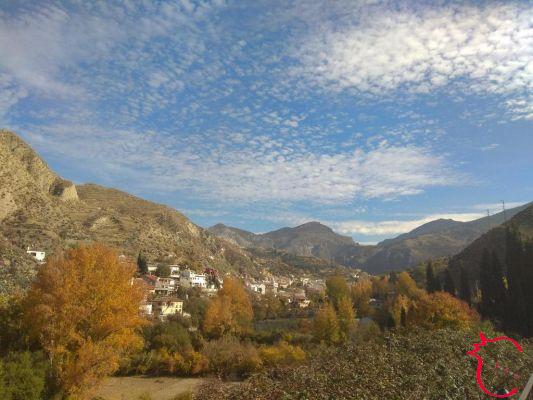 Been to Monachil? If you are in Granada do not miss the wonderful village of Monachil.

Monachil is a Spanish municipality in the province of Granada located in the autonomous community of Andalusia.

Its territory (90,13 km2) is crossed from east to west by the Monachil river and has an elongated morphology with gradients ranging from 3.394 m. della Veleta at 740 m. of its valley. The country offers numerous places of great natural and landscape interest.


Against the backdrop of the Sierra Nevada National Park, the 3.481 meters of Mount Mulhacén and 3.394 meters of the Veleta peak, the Los Cahorros path and the La Cortijuela Botanical Garden stand out. Los Cahorros de Monachil is located along the Monachil River, in a natural canyon where it is possible to walk on wooden bridges.

The population of Monachil is about 6.000 inhabitants and the municipality of Monachil is made up of the nuclei of Monachil Pueblo, Barrio de Monachil and the ski resort of Sierra Nevada (Pradollano - known for the 1996 Alpine World Ski Championships).

Its name derives from the Arabic, Monastir, a term of Latin origin which means “monastery”.

What to see in Monachil:

This Augustinian convent stands in stark contrast to the surrounding environment. The building, built at the beginning of the XNUMXth century, was initially a textile factory. The convent has a large structure: on the outside there are rows of windows with arches, on the right side stands the church of the early decades of the twentieth century, corresponding to the historicist style. The façade houses a door with Corinthian pillars and capitals, on which Saint Augustine is depicted in relief. The image of Santa Rita is the work of the sculptor Jesús García-Ligero.

The origins of Monachil date back to 1300 BC ("Culture of the Argar"). Being the westernmost Argarian colony in Andalusia, the strategic area of ​​this city constitutes an important trade and communication route. Very important were also the defensive structures built in Monachil of which numerous fragments are still preserved in the archaeological museum.


Church of the Incarnation

This church is the most important architectural work of Monachil. Erected as a parish church in 1501 it was built on the main mosque of the three existing in Monachil. Inside there are important works dedicated to the devotion of Sant'Antonio, patron saint of Monachil.

House of the Mill or of the Lords of Aragon

Of great historical and artistic interest is the Casa del Molino, also known as “the house of the lords” (casa de los señores de Aragón). Its current structure is the result of the union of two different houses. The most interesting element is undoubtedly the old courtyard. The house was owned by the Venegas family, descendants of Don Alonso Venegas and his wife Brianda, a couple of wealthy converts whose names figure among the first settlers of Monachil, after the fall of the Nasrid kingdom.

Where to sleep in Monachil:


Visit the website to find out the calendar of events
Email: www.lachisteramonachil.com

The Quince Festival takes place in Monachil Pueblo in June. The Membrillo Festival is a popular initiative which, with the support of Monachil's neighbors and the collaboration of the municipality, is growing little by little and this year celebrated the sixth year of its edition.

The Festival aims to be a space open to culture and fun, laughter and joy. It wants to be a meeting place between the different people who live in Monachil and those who want to share this day.

The programming is designed for all audiences and even children have their own with different activities throughout the day.

For more information on the municipality of Monachil consult the official website: www.monachil.es

We just have to wish you a good excursion to Monachil.

add a comment of Monachil: a town just 8 km from Granada