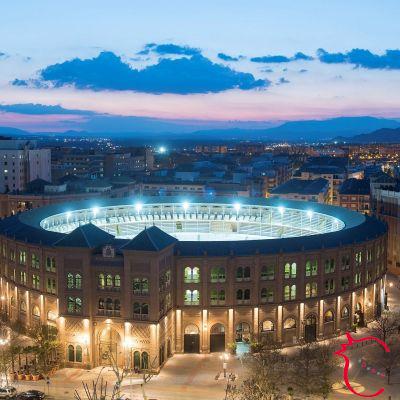 We propose what to see in the Triunfo area - Plaza de toros of Granada, 4 ideas for your visit to the magnificent city of the Alhambra.

Beyond the ancient walls of the Muslim city, Granada began an expansion in the centuries following the Christian conquest which was consolidated with the location in the area of ​​the railway station. This is a very lively area of ​​the city, there are many tapas bars especially around the Plaza de Toros.

This building is the work of Melchor Arroyo, Martín de Bolívar, Enrique Egas and Pedro de Mena. The work began in 1511 by order of the Catholic King, hence the origin of its name. The building was part of the public facilities program undertaken by the Crown after the takeover of Granada. Today it is the seat of the rectorate of the University of Granada.

The Cartuja Monastery in Granada with an inconspicuous exterior hides a baroque marvel of great richness and refinement. The Carthusian Monastery of Granada is located on the hills of Aynadamar, a place full of beautiful gardens and orchards irrigated by the water coming from Alfacar.

Today the Plaza is one of the 10 largest bullring in Spain with 9.000 m² and three floors. Initially designed to have a capacity of 14.500 seats, in the last decade of the 12.500th century it was reduced to 1992 seats. Since XNUMX for its architectural value the Plaza de Toros of Granada has been declared Property of Cultural Interest in Spain.

The Puerta de Elvira or Arco Elvira is one of the most emblematic historical-artistic monuments of the urban evolution of the city, as it was the main gateway to the city of Granada during the Islamic domination. It is an exceptional legacy of Hispano-Muslim military architecture.

Getting to Granada by plane ❯