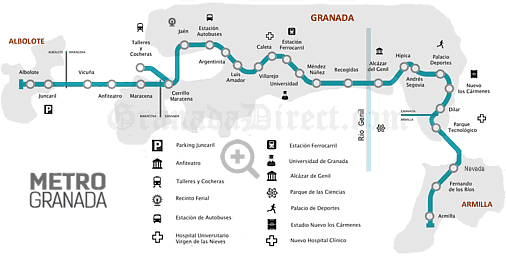 Granada is the Andalusian city that probably takes the longest to visit, so even a weekend could be too short. In fact, the advice is to be able to take at least 3 days to fully enjoy the beauties of this city.

Visit the Alhambra, the most visited monument in Spain.

Among the monuments to see in Granada, first of all visit the Alhambra complex, the rest comes second; so you can think about spending a day at this important monument, which is the most visited of all Spain and shows us the splendor that had reached the city during the Nasrid dynasty.

There are 2 shifts to visit the complex, one in the morning and one in the afternoon; in fact during the summer there is also a night visit which however allows you to see only the Nasrid Palaces, the Alcazaba and the Generalife, the spectacle is certainly exciting, but for the first time it is advisable to make the complete visit during the day.

Built in the early 1300's, inserted in the Alhambra complex, the Generalife Palace is a wonderful fortress.

Its incredible gardens are an ecstasy of ponds, courtyards, flower beds and green labyrinths, with hedges treated to the smallest detail that even today are recognized worldwide as an achievement of the highest level and taken as a model for the design of green areas.

The Corral del Carbon and its elaborate horseshoe arch.

Located in Mariana Pineda Street, it is the oldest monument left by the Arabs, built in the 14th century in a perfect state of preservation. It is certainly worth even just seeing the courtyard, which takes about ten minutes. It used to be a merchants' inn which later became an inn for coal merchants and eventually and today it is a centre for local craft shops and open air theatre.

El bañuelo, the arab baths of the 11th century

Walking down Calle Reyes Catolicos, after crossing the Plaza Nueva, the oldest square in the city, you reach El Bañuelo, the impressive and well preserved 11th century Arab baths. The visit is quite quick, the place is also known by the name of Aammim Alyawza. As soon as you enter you can get an idea of what the old Arab baths were like.

Stroll through the centre of Granada and its Cathedral

After the Alhambra, you can see the centre of Granada by first visiting its cathedral, built in place of the Great Mosque. There are several chapels to visit inside, but the most striking is undoubtedly the Royal Chapel, where the remains of the Catholic Monarchs lie. It is not necessary to buy tickets in advance, but remember that the cathedral is closed on Sunday mornings and public holidays.

Something to definitely see in Granada is the Carrera del Darro and the Paseo de los Tristes , probably the most beautiful places in the city.


They are located near the Darro River, which crosses over two stone bridges and offers a breathtaking view of the Alhambra. The area is pedestrianized and is full of bars and restaurants where you can enjoy a beer and tapas.
Absolutely to do is a pleasant walk along the Darro between aristocratic buildings and palaces, churches, up to the gardens where you can admire the imposing walls of the Alhambra.

Experience the atmosphere of Granada

More than seeing it is living the atmosphere of Granada , we recommend you to end the day in the Sacromonte district or in El Albaycin , where there are several bars and gypsy taverns where flamenco shows are performed for tourists. The price of these shows is around 20-25 euros, which also includes the tasting of typical dishes, and they all start around 21:00 hours.

See the Albayzin and Sacromonte quarter

The first is located on the hill in front of the Alhambra and offers glimpses of the old city: Moorish houses, narrow streets and a breathtaking view of the Alhambra is a medieval Moorish quarter declared a World Heritage Site by UNESCO.

The second one, on the other hand, is more known for its bars, taverns and gypsy atmosphere.
To get to these two districts you can take buses 31, 32 and 34, or walk, bearing in mind that the road is uphill and the narrow streets often turn into a labyrinth in which it is easy to get lost.