Are you in Granada and it's a cloudy day? Don't worry! In Granada you never run out of plans. That's why in ForGranadaLovers we have created a list of things to do on a rainy day in this city. 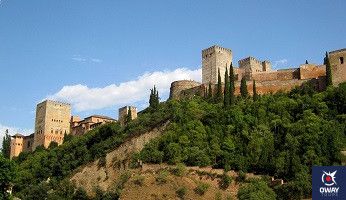 Are you in Granada and it's a cloudy day? Don't worry! In Granada you never run out of plans. That's why in ForGranadaLovers we have created a list of things to do on a rainy day in this city.

Things to do on a rainy day in Granada

Unfortunately, sometimes mother nature has other plans. The city only has 50 days of rain a year on average, but what if one of those 50 days falls during your trip? It may seem like there's nothing worse than getting caught in the rain when it comes to exploring a new city.

Relax in the hammam

Sometimes the best thing to do in Granada when it's raining is to just sit, relax and wait. There is no better place to do this than Hammam Al Andalus. Returning to the Moorish baths of Moorish Granada, the colourful tiles and large stone arches inside will take your breath away and provide the perfect setting for relaxation.

Take part in the ancient ritual of alternating between hot, cold and warm pools. This perfect simultaneous feeling of stimulation and relaxation is unlike anything you've experienced before - treat yourself to a massage while you do it too! When the skies clear, you'll emerge relaxed, refreshed and ready to explore the city.

Rewarm yourself with tea or churros.

Another lasting tribute to Granada's Moorish days is the plethora of Moorish-inspired tea houses or casas de té. A cup or two of traditional Arabic mint tea is the perfect place to gather in Granada when it's raining.

For something sweet, go to one of our favourite churrerías and enjoy the Churros de Chocolate! Churros, fried to perfection, and delicious hot chocolate are perfect no matter the weather, but this classic combination is especially comforting on a rainy day.

Enjoy a fascinating indoor cultural experience! With over 20 different museums to explore, you can easily spend a rainy day in Granada at one or more.

Discover one of Granada's cultural icons at the Fundación Rodríguez Acosta (Callejón Niño del Rollo, 8) or the Centro Federico García Lorca (Plaza de la Romanilla, s/n). If you're travelling with young children (or even if you're not!), the interactive, hands-on exhibits at Science Park (Science Avenue, s/n) are sure to delight and surprise.

A favorite rainy-day activity, no matter where you are in the world, has always been the movies. There's just one problem: the vast majority of movies in Spain are dubbed into Spanish. This gives you two options. If you're up for the challenge, check out the dubbed version of the latest blockbuster here in Granada when it rains. If you're experienced in Spanish, this is a great way to improve your language skills, even if you're not far from home.

Don't speak Spanish (or maybe you do, but aren't familiar with English)? The local Kinépolis cinema (Kinépolis Commercial Park, Blvd. Billy Wilder Street, s/n, Pulianas) regularly shows unreleased films in their original language with Spanish subtitles. On Tuesdays they even offer a special program with films in the original language. Check the calendar to see what movies you can see in English.

It's no secret that Spain's shopping culture is one of the best in the world. Quality brand name products are not only easy to find, but they are often quite reasonably priced and a crazy splurge won't hurt your wallet as much as it would at home.


Head to one of Granada's best shopping centres, such as Nevada Shopping ( Av. De las Palmeras, 75, Armilla ) or Serrallo Plaza ( Paseo Lagunas de Cameros, 1 ) and shop till you drop to escape the rain. Many of the city's most popular shopping centres also offer children's entertainment, so even the most comfortable youngsters will be easily entertained.

Go to a flamenco show

The thing to do in Granada when it rains at night is to immerse yourself in a tablao and experience Andalusia's most exciting and iconic art form. Flamenco is more than just dancing. Although the incredibly talented dancers are an integral part of the show, the captivating singer and expert guitar are the heart and soul of flamenco.

Due to its popularity on an international scale, flamenco has, unfortunately, become rather touristy in many cases. Do a little research to find an authentic flamenco corner in Granada. There may be a tourist or two, but these spaces are remarkably local and represent flamenco as it should be experienced.

add a comment of Rainy day plans in Granada