The unknown path around the Alhambra 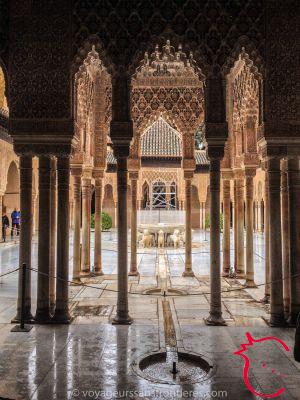 Granada never ceases to amaze !! The unknown path around the Alhambra. A picturesque route where you can enjoy the history, the landscape and the walk.

A walk away from the noise of the city of Granada, a path full of history and beautiful landscapes along a path that will allow you to visit the Hacienda de Jesús del Valle, the Royal Dam of the Alhambra and the Valparaíso Valley.

Thanks to Secrets of Granada and to its director, Isacio Rodríguez, we discover this picturesque and unknown path of great environmental value and of great scenic and historical attraction of Granada.


A path that is really worth walking and that runs along the two banks of the Darro river through dirt paths.

The first stop is an ancient Jesuit "hacienda", the Hacienda of Jesús del Valle, which included land for nearly 400 hectares. It is also a very large building with an oil press, mill, stables and the chapel of the friars, cloister and various rooms.

Jesús del Valle was, undoubtedly, the main dispensation of the Jesuits in Granada, together with a place of retreat in a privileged environment. Unfortunately, the abandonment of this building has encouraged the greed of speculators and its state is that of total abandonment.

The path is lined with trees, orchards, olive groves, almond trees on the slopes and large farms where more than thirty families lived.

The second leg of the trail is one kilometer away: the Royal Dam of the Alhambra, the beginning of the two royal canals that have brought water to the Nasrid Palaces and Generalife since the XNUMXth century, and two other canals that bring water to the city: that of Romaila or Santa Ana and that of Áxares or San Juan.

The Valle di Valparaíso, the last stop on this itinerary, it offers everything that is desirable for a pleasant walk outside the city; a real delight for the senses that takes us away for about 3 hours from the urban noise and immerses us in the charm of the water, the vegetation and the nearby slopes of the Sierra de la Alfaguara, Beas, Huétor.


This route is not difficult, so it is accessible to all types of public, its duration, round trip, is about 3 hours, and to do so it requires only suitable footwear and clothing, as well as a bottle of water.

add a comment of The unknown path around the Alhambra