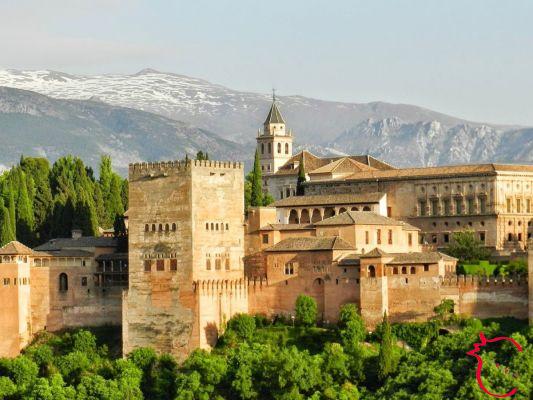 The situation with the pandemic and restrictions is changing. For more information read the Coronavirus update in Andalusia.

I monuments in Granada there are many to see, not only is the Alhambra, and for this it is necessary to visit this city during at least two days. A city of Andalusia rich in heritage, especially from the Muslim period, but also from Christianity. The Christians, in fact, did everything to try to overshadow the flashy Islamic testimonies of the city that symbolized Arab domination in Spain.

See also -> What to see in Granada: complete guide

See also -> Where to sleep in Granada

See also -> Where to eat in Granada

The Alhambra from the Casa de Zafra.

Dall'Alhambra, all'Albaicín but to Realejo, these three areas of the city shine with goods and monuments to discover. The Alhambra and the Albaicin with an Arabian heart, while the Realejo Christianized. Except for the Alhambra, all the monuments described below can be visited with the comfortable Granada City Card, which in addition to the entrance to the monuments also offers 9 rides with the urban public transport.

A view from Abadia del Sacromonte.

How not to start withAlhambra, the jewel of Granada and the most visited monument in Spain. The Arab fortress that overlooks the city, a huge citadel that you have to take at least to visit it a morning or a whole afternoon. A Unesco heritage asset that is always complete and that we must remember reserve tickets well in advance.

-> Book tickets for the Alhambra

See also -> Alhambra of Granada: tourist guide and how to get there

2. Enter the Cathedral of Granada

It is the most important Christian monument in Granada. The mammoth Cathedral was built between the XNUMXth and XNUMXth centuries. A work of relevant architects such as Diego Siloé and Alonso Cano. Here in addition to the architectural elements we also find artwork, one even attributed to Leonardo da Vinci.

Facade of the Cathedral of Granada.

This chapel houses the remains of the Catholic Monarchs and is the symbol of the Christianization of Granada, the Islamic capital par excellence in Spain. In Royal chapel we find, in addition to notable and very precious artistic elements, a sarcophagus with the bodies by Fernando II of Aragon, Isabella I of Castile, Philip the beautiful, Giovanna the mad and Charles V. It is not possible to take pictures in this space.

Photo before entering the Capilla Real.

With the Granada Card Ciudad we can visit the Madraza with a discount, unlike other goods, you will not enter for free. However, paying the ticket is absolutely worth it. The ancient Islamic university of Granada, in fact, it's fantastic. The upper floor is just a preview of the incredible room on the ground floor. A Arabian wonder in the middle of the Realejo and the very Christian Cathedral and Capilla Real.

È one of the few surviving Arab baths and which can still be admired so preserved and is also one of the oldest in the Iberian Peninsula. The Bañuelo, as well as the Arab baths in general, according to Christians, were sinful places and therefore to be destroyed. Fortunately, we can still enter and observe this particular structure today.

Il Corral del Carbon it is the only building dedicated to grain trade formerly Nasrid which subsists in Spain. L'arch of the access door it is certainly the most striking element, but also the large courtyard with arcades and plants has a great charm and is worth a visit.

La Zafra's house, located in the Albaicín neighborhood declared a World Heritage Site in 1994, is one of the examples of Andalusian residential architecture more relevant and better preserved. The cultural values ​​of the property are numerous. In it, we find historical, artistic, architectural and landscape assets of great importance.


The courtyard of the Casa de Zafra.

Along the homonymous climb that connects the Paseo de los Tristes with the high Albaicín is the Casa del Chapiz. A property that conforms to two palaces, a very nice courtyard and a garden extremely romantic with a view of the best views at the Alhambra. Today this houses the Institute of Arab Studies.

The Palace of the Casa del Chapiz.

9. Get up to Abadia del Sacromonte

From Plaza Nueva or Paseo de los Tristes you can take thecity ​​bus number 34 which will lead us to discover the neighborhood of Sacromonte and above all the Abbey. Passing by the Sacromonte we will see the characteristics cave houses, but it is fromAbadia del Sacromonte when we will be surprised by the religious building and one very special view.

It is one of the new assets of Granada open to the public. It was a beautiful one nasrid palace built during the reign of Muhammad II (1273-1302). Located between orchards or farms, the relevance of this palace lies in its condition of being antecedente all'Alhambra This means that some architectural and decorative solutions present here have been embodied in the palaces of the Alhambra.