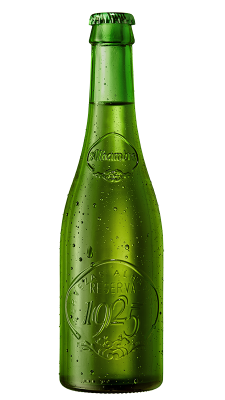 If you haven't already, try Alhambra beer, the real beer of Granada!

Birra Alhambra is a Spanish brewery company founded in 1925 in the city of Granada. The craft beer brand belongs, since 2007, to the Mahou-San Miguel group. In the production of its beer, the company uses different varieties of hops, malt, yeast and water from the Sierra Nevada mountains.

You can choose between various types according to your tastes:

Born in 1925 in Granada according to the original recipe, it is produced with the purest water of the Sierra Nevada and the best cereals from southern Spain. The first thing you notice about the Alhambra Reserva 1925 is the lack of the label. The inscription “Reseva 1925” can be seen in relief on the glass. This gives the bottle a particular elegance! Beer is awesome! It introduces itself to bright golden color with amber notes. On the nose delicate aromas emerge with a faint floral accent. When tasted, the sweetness of the malt is well balanced by the hopping. This gives freshness, a low degree of bitterness, a good balance and hides the pronounced alcohol content very well.

A beer made with 100% Spanish ingredients, of medium intensity, ideal to drink daily. The bottle is dressed in gold and white, a symbol of its purity. It proposes an image of elegance. A lager with an intense and clean flavor. The careful processing process combined with the experience of the master brewers, makes Alhambra Especial a low fermentation beer with full body, full flavor and soft on the palate. Characteristic bright golden color with an intense aroma of malt and hops.

Alhambra Reserva Roja is an extra intense red beer that hides an extraordinary delicacy on the palate. At a first sip its intense flavor is perceived; a second sip shows us a powerful and voluptuous beer, with flavors of sweet toasted cereal, a touch of ripe white fruit and the bitter counterpoint of hops.

It is characterized by its soft bitterness on the palate and the great consistency of the foam. With a natural and exclusive method, the formation of alcohol is avoided. Alhambra Sin is the tastiest non-alcoholic beer. Its exclusive processing process, its 100% natural raw materials and its flavor, give it a refreshing taste with a mild and slightly fruity bitter taste, which blend with those of a beer with alcohol and leave a broad aftertaste to the palate.

You just have to try them all!

A wedding in Andalusia: M&F weds along the coast of Granada ❯

add a comment from Alhambra Beer - The beer of Granada