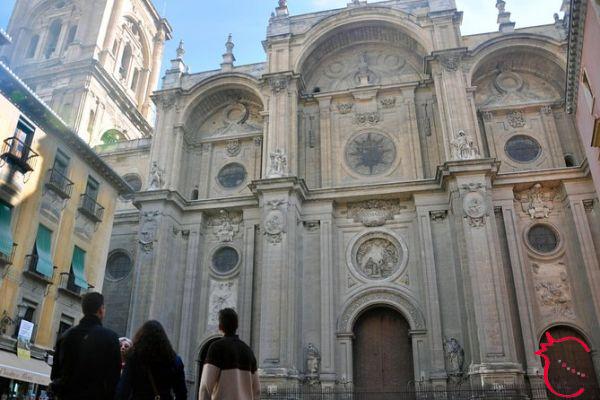 With this article we want to give concrete help to the organization of the visit of the Granada Cathedral and Royal Chapel, two monuments whose history and characteristics are worth knowing.

Why and how to visit the cathedral of Granada

Granada, you have already understood, is one of the cities in the world where different cultures have alternated and intertwined, in some cases peacefully, in many others with bloody wars. One of the main features to denote the differences between the peoples who have quarreled is the city the religion.

La Granada cathedral it is not just a church, it is a symbol of the strength of one people over the other, a sign of supremacy granted by God on this territory. This concept also led to think about the architecture and to enrich it with numerous treasures.

How to reach us

The main facade of the church is located in Plaza de las Pasiegas, and right from here you enter. Granada has lost its greatness over the centuries in terms of population, and now you can easily get around it on foot, so you will have no problem locating this monument, like most of the sights in the city. In Gran Vía de Colón, near the square, stop the bus C1, 111, LAC, which can be useful if you stay outside the historic center and want to get here quickly.

The entrance ticket has the following prices:

On Sundays, from 15 to 18 pm, theentry is free for all. However, it is necessary to book admission on the official website.

Orare opening of the Cathedral

The cathedral is open to visits in the following times:

It is the imperial city project of Emperor Charles I that gives meaning to the Granada cathedral. The 21 May 1492 thus begins the history of the church, with the foundation of the cathedral chapter. Initially the seat was the royal mosque of the Alhambra, but in January 1493 Hernando de Talavera was appointed first archbishop of Granada and in October 1494 the cathedral began a series of transfers: first to the temple of Santa Maria nel Realejo, then to San Francisco, until definitive move that took place only in 1502.

Despite Queen Isabella's will, the ancient mosque was not considered suitable as the seat of the cathedral and it was decided to build a new large temple here, in the city center, starting with the Royal Chapel of Granada.

The exterior of the cathedral

As I mentioned, this church has a symbolic importance as well as a purely religious and artistic architectural one. Seeing it in its urban context is essential. The grandeur of the building (115 x 65 meters of plant) is striking for how it is placed in the middle of the city: it seems that moving through the center every street leads back here, and that it is not isolated, but connected to the surrounding buildings. In a way it is. It was designed as a monumental complex that in addition to the Royal Chapel includes the Slice parish of the Sagrario, college of San Fernando and various houses and outbuildings.

Next to it, we find the archbishop's palace and the important building where the first Christian university of Granada was located, which later became the Ecclesiastical Curia in 1769 and today Centro Cultural Nuevo Inicio. But what is most striking is the neighborhood where the church is located: the surrounding streets were those of traditional crafts and markets, here people worked and traded. It was therefore the liveliest part of the city, chosen not by chance as the final place to place the main temple.

My advice is to start from Plaza de las Pasiegas to see the facade, then moving to the left to admire the bell tower and continuing in via Carcel Baja to see the gates of St. Jerome and Forgiveness. Arriving in Placeta de Diego Siloe, you can finally see the Clock Tower and Ecce Homo Gate.

The facade and the towers

As I mentioned, we are in the trade district. Plaza de las Pasiegas owes its name to fabric vendors. The monumental baroque facade dominating the square has two important features: its architecture and decoration and, above all, its iconographic program. Both aspects are strongly linked to the interior decorations and the symbolism of light.

According to Siloe's design, the Renaissance façade was flanked by two imposing towers of 81 meters, designed with three square bodies topped by an octagonal room. For various reasons, the right tower was never built and the left one was completed with a height of 57 meters. Although lower than the original idea, the Campanile it is still a great example of the architectural novelties of 1500, with a predominant verticality and the fusion of different styles. Architecturally, the first body is of the Doric order: it has pillars with niches and large arches. The second, of Ionic order, has double pillars and arches with simple and graceful roofs. The third is of Corinthian order and its columns begin with a large arch which in turn houses groups of three arches for the positioning of the bells.

Much simpler and smaller than the main bell tower, the Clock Tower it is located at the rear of the church, next to the dome. It has two bells, one above and one below: the high one for the hours, the low one for the quarters.

The treasures it contains

The first thing to see upon entering is the main chapel, which is also the center of the church's architecture: the sovereign was originally supposed to be buried here and the visitor is accompanied on entering the church. This space began to take shape in 1528 with the Alba-Siloe project and is unique among all Spanish cathedrals for its iconography.

Before getting there, however, we find two altars. L'Altar of the Holy Christ it is famous for its altarpiece painted with works by the disciples of Cano Pedro Atanasio Bocanegra and Juan de Sevilla. Of the latter, the painting of the scourging of Jesus is estimated as one of the best paintings in Andalusia. The same two artists decorated theAltar of San Bernardo. Here is perhaps more relevant the work of Bocanegra, theBreastfeeding of the Virgin: a chromatic explosion, an exhibition of all the artist's abilities. With these two altars we find the first hints to the concept of 'salvation', which will then develop with the works of the Main Chapel.

La Cappella Maggiore, not to be confused with the Royal Chapel, is the focal point of the cathedral, which inspires harmony, resulting from the work with different materials, from the meeting of different styles and historical contributions. Here Siloe attempts to copy the Holy Sepulcher of Jerusalem and does so with distinctive features of the European architectural tradition.

The cathedral of Granada has a very rich pictorial heritage, distributed in the Main Chapel and in the western pediment, in the side chapels and on the perimeter altars, in addition to those preserved in the museum cathedral. The oldest painting contained in the temple is the Virgin of the Pòpolo, a gift from Pope Innocent VIII to Queen Isabella. Examples of Flemish, Italian and Spanish painting are also preserved in this church.

In the museum, however, the oldest and most famous painting is the Madonna and Child, whose author is unknown and which some even attribute to Leonardo da Vinci. Unfortunately, the canvas is in poor condition and has had to undergo numerous restorations. Virgin with the sleeping Child instead it is a painting by Giovanni Battista Salvi, known as Il Sassoferrato. There Immaculate Conception by Juan Sánchez Cotán, the Virgin of milk by Francisco Pacheco (master of Velazques and Cano) are other interesting paintings. The latter, also known as The Virgin of Bethlehem, responds to the frequent iconographic theme of Mary in the act of breastfeeding the baby Jesus. Surrounding Mary, a group of ten angels: five playing musical instruments, and others singing with an open book in their hands. In the upper right corner, a baby angel dressed in white completes the maternal scene.

La Capilla Real: the mausoleum of the Catholic kings

Next to the Cathedral, stands the Royal Chapel. This is where they are kept the remains of the Catholic Monarchs Ferdinand and Isabella, but also those of Filippo il Bello and Giovanna la Pazza. In 1506 the two sovereigns ordered the construction, together with the cathedral, of this mausoleum to be able to rest there after death.

La Capilla Real is adjacent to the cathedral, it is not part of it, but at the same time it embodies its grandeur through its architecture with the dome and stained glass windows, sculptures and paintings by Alonso Cano. Perhaps the portals deserve the greatest interest. The three doors ofBehold the man, di San Girolamo and Forgiveness.

Inside, next to the works of art that express the pictorial talent in particular of Alonso Cano, the place of greatest interest is the mausoleum. Work of the Florentine sculptor Domenico Fancelli, the figures of the two sovereigns are represented lying down. The king is characterized by a military connotation: full armor and cloak, hands on the sword. The queen is represented with simplicity, with her hands gently resting on her body, which transmits humility and honesty: the virtues that were associated with her in life. At the feet of the kings, two lions, a symbol of royalty and vigilance. On the sides of the bed, instead, there are four roundels representing the baptism of Christ, the resurrection, St. George with the dragon and St. James.

Hours and prices of the Royal Chapel of Granada

La Royal Chapel it can be visited from Monday to Saturday from 10.15 to 18.30; Sundays and holidays from 11am to 18pm. The entrance fees are as follows:

On Wednesdays, from 14.30pm to 18.30pm, the visit is free for everyone. However, it is necessary to book through the official website.

What to see and do in Granada ❯

add a comment from Visit the Cathedral of Granada and the Royal Chapel, symbols of the Reconquista