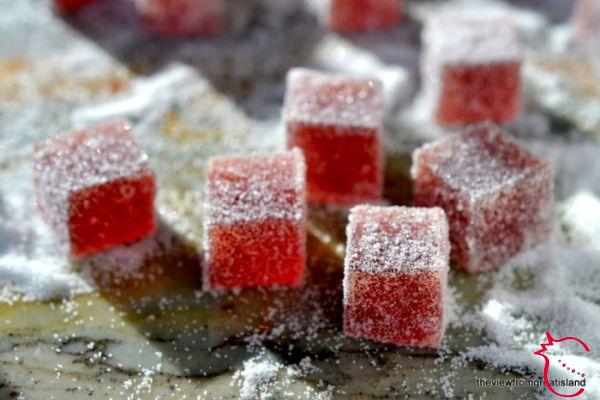 Christmas sweets typical of Granada, let's discover some of them!

Granada is a city with a rich tradition of sweets that it inherited from the Muslim culture. For this reason, ingredients such as honey, almonds and sugar are used in the typical Christmas sweets of Granada. This heritage has been mixed with that of other cultures and traditions and has evolved throughout history.

The recipes of the desserts have been transmitted orally from parents to their children, but it is above all the cloistered convents that have preserved these recipes, and the nuns are the most experienced pastry chefs in the city.


Roscos del Padul
These are aniseed donuts with powdered sugar produced in Padul, one of the villages that form the Lecrín Valley. These sweets are mainly made at Christmas, as they are typical sweets of these holidays.

Albaicín Alfajores
Alfajor is a Christmas sweet typical of Granada, mainly because its name indicates that they are the specialties of the Muslim quarter of Granada, known as Albayzín. They are made of honey, hazelnuts, almonds and spices and are popular with both city dwellers and visitors.

Mohina Casserole
The cazuela de Mohína originates in the Nasrid pastry and is mainly consumed in Almuñécar, a coastal city of Granada. It is made with almonds, bread and spices. It is mainly a Christmas cake but is also consumed at other times of the year.

Quesito de Belén
This dessert can be purchased in the Convent of San Bernardo, where each dessert is a small work of art. It is composed of a small filling of angel hair (caramelized fruit pulp) and topped with a biscuit wafer.

Gloria's cake
This typical dessert can be purchased in the Convent of Santa Catalina de Zafra, in the Albayzín. It can be purchased only on request. It is a sponge cake made with a traditional Arab pastry recipe, which the nuns keep secretly, as if it were a treasure.

Albaicin whims
They are typical sweets of the Albayzín area. Casa Pasteles, located in Plaza Larga, is the laboratory that processes these sweets. It is made with figs, almonds, liqueur and raisins, wrapped in chocolate. The texture and aroma are very similar to marzipan. Its fame has grown so much that it is exported throughout Europe and the United States.


Altar boys
Another of the delicacies of Casa Pasteles. It is a dessert made with dates, filled with hazelnuts, covered with chocolate and finished with a little white chocolate.

Ambrosia
It is a hazelnut covered with hazelnut cream, with biscuit, and wrapped in dark chocolate. The raw materials used make it very expensive, so the selling price is slightly higher than other Christmas sweets.

Other typical Spanish Christmas sweets are:

Polvorones
These typical Christmas sweets look like cookies, but have a drier texture. Polvorones are famous for crumbling in the mouth and turning into an almond and butter powder filled with flavors like vanilla, cinnamon, etc. The best known are produced in Estepa, the "capital" of the mantecados, in the Autonomous Community of Andalusia.

Mantecados
They are traditional sweets very similar to polvorón due to their fragile and light texture, but they are mainly made with lard and sugar. The most common ones are cinnamon flavored, but are produced in a variety of different flavors, such as anise. The mantecado dates back to the 16th century, from the area of ​​Antequera and Estepa, two Andalusian cities that continue to compete for its origin.

Roscón de Reyes
It is sold throughout the country and consumed on January 6 (the day of the Three Kings). The roscón is a large donut-shaped bread glazed with dried fruit and sprinkled with sugar. Inside there are two particular surprises: a figure of baby Jesus or a coin and a dried bean. According to custom, whoever finds the coin or the figure of baby Jesus will have good luck in the new year and whoever finds the bean must pay the roscón.


Nougat
Nougat is a traditional dessert of Arabic origin made with honey, almonds and caramel that has become the most popular of all Spanish Christmas sweets. It is available in three versions: soft (a ground almond paste), hard, and chocolate (a mixture of chocolate with toasted almonds or puffed rice); soft is a specialty of the city of Jijona and hard is a specialty of Alicante. Other more modern and creative but less traditional varieties are with coconut, candied fruit, coffee, rum with raisins, whiskey, truffle, orange, etc.

Marzipan
There is a good reason why Toledo is the producer of the best marzipan in Spain. Legend has it that during a famine the nuns used eggs and almonds (the only remnant of the pantry) to prepare a sweet pastry that saved the city from hunger. Today, marzipan - as they are known in Spanish - continues to be a very important Christmas delicacy in Toledo, where they continue to be prepared with the same centennial recipe as the nuns. Traditionally they come in various colors and molded into shapes. Some can be filled with egg yolk or jam.

Christmas log
Spongy cake in the shape of a roll and layers of any creamy filling, covered with a thick layer of chocolate (and grooves to mimic the bark of a tree) and decorated with holly leaves, mushrooms, raspberries, etc. of marzipan. It is a cake that resembles the trunk of the Christmas tree that is placed in the fireplace and which is supposed to burn during the 12 days of Christmas.

Marquesas
These are very thin and spongy square cakes made from a mixture of almond paste and marzipan. They are completely covered with powdered sugar and the flavor is that of almonds with a light touch of lemon.

Panettone
This tall, round dessert, characteristic for its dome shape filled with candied fruit, is a very popular dessert that is made during Spanish Christmas, although its origin is Italian. In Spanish it is called Pan de Oro.

Sultans for a night in the Parador of the Alhambra in Granada: an experience to try! ❯

add a comment of Typical Christmas sweets of Granada