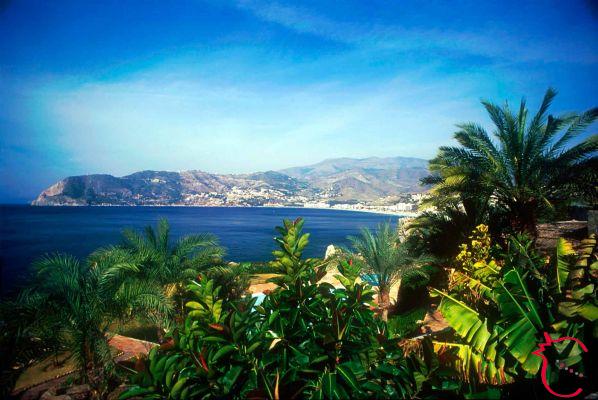 If you are in Andalucia, visit the Costa Tropical of Granada!

The Tropical Coast of Granada. The name of Costa Tropical is essentially given to the Granada coast which enjoys exceptional climatic conditions thanks to the high peaks of the Sierra Nevada that protect it from the north winds. In total there are about 19 km of tropical coast where we can meet about 26 beaches.

A tropical and temperate microclimate is generated throughout this area, giving rise to the cultivation of tropical fruits that are unique throughout Europe, such as cherimoya, mango and avocado. In the past it was also the European center of sugar cane cultivation.


The Granada coast is characterized by beaches with dark and thick sand, although there are fine sandy beaches such as Playa Granada, San Cristóbal or El Tesorillo.

The beaches of Granada are not as urbanized as those of the Costa del Sol and you can find quiet bays with crystal clear waters. There are fascinating places, such as Salobreña, a white village perched on a hill with an Arab castle.

We recommend visiting the Lecrín Valley, which looks like an orchard of orange trees in bloom with many small white villages scattered throughout the territory.

Velez de Benaudalla is a town that preserves the ruins of an Arab castle and a XNUMXth century church.

The most important cities on the coast of Granada are Almuñécar, Motril and Salobreña, very old and rich in historical and cultural heritage.

Almuñécar is one of the most important tourist destinations on the Costa Tropical. Its beaches, its elegant marina, the charm of its streets in the old town, the castle of San Miguel, the lively nightlife in its bars and pubs, summer concerts in the Parque del Majuelo, make it an ideal place to spend a Sea Holiday.

The city of Almuñécar was founded by the Phoenicians in the XNUMXth century BC and during the Roman domination in the XNUMXst and XNUMXnd centuries it experienced a period of great splendor. However, the name we know today has Arabic origin. "Al-Munekab" or "Hisn al-Monacar" refers to a fortress on the hill. Few cities in the world can boast Phoenician, Roman and Arab remains in their monumental heritage. A must visit!

With its 59.163 inhabitants, Motril (the second largest city in the province of granada) is a modern city with wide streets and all services.

Its heyday began in the nineteenth century, with the development of sugar cane, although the crisis in the sector in the twentieth century closed all its sugar factories.

Traces of this past are still present in the city and are part of its cultural heritage.

If you are interested in this story, visit the Sugar Cane Interpretation Center or the Sugar Cane Pre-Industrial Museum in the beautiful Casa de la Palma.

You can also visit the Bodegas Ron Montero, where an excellent Spanish rum has been produced for 50 years.

Today Motril maintains an important agricultural and commercial activity, thanks to the cultivation of tropical fruit, but its commercial and maritime port is also known.

Salobreña is undoubtedly one of the most beautiful villages on the Costa Tropical. A stroll through its steep and narrow streets reveals its Arab past.

In addition to the castle, we suggest you visit the Historical Museum, where you can discover the roots of the village with over 6.000 years of history.

The neighborhoods of Villa, Albaycín and Brocal, around the castle, are beautiful corners of Andalusian charm, with their whitewashed facades overlooking the sea.

Typical gastronomy of the Costa Tropical of Granada:

The cuisine of the Costa Tropical has ancient roots and traditions, as well as the many civilizations that have reached its coasts: Phoenicians, Greeks, Romans, Arabs. The cuisine is mainly based on fish: blue fish, fried squid, anchovies, shrimps, cod and many others.


Try the famous "moragas", a refined culinary technique that allows you to taste fish in a different way.

Potato stews with dogfish, monkfish salads and soup made with sardines, squash and spices, have a lot of culture and archaic history. Also try rice, gazpachos and salads accompanied by Costa wine, produced in the surrounding mountain villages.

Also noteworthy are the Arab-inspired desserts, such as the royal Motril cake with almonds and sugar, the pestiños of Vélez and the fried rosquillo.

Sports practiced on the Costa Tropical of Granada:

All beaches are ideal for scuba diving. La Herradura beaches stand out for their spectacular backdrop.

If you are an adventurous tourist, on the coast of Granada you can choose between diving, paragliding, windsurfing, jet skiing, whale watching, climbing, kitesurfing, etc.

The only golf course in the area is located in Motril, on a beautiful and quiet beach: Playa Granada.

For canyoning lovers, Rio Verde is a must. But also for those who want to take a dip in pools of cold and crystalline water after a beautiful hiking trail through the gorges of this spectacular mountain range.

Climbing is very popular on the Costa de Granada. Along the N-323 Bailén-Motril national road, following the course of the Guadalfeo near Vélez de Benaudalla, you come to the Tagus de los Vados, a climbing area with over 200 meters of altitude and 200 trails on several walls.

How to reach the Costa Tropical of Granada:

From Granada, the Sierra Nevada A-44 motorway almost reaches the coast, connecting with the Mediterranean A-7 motorway which leads to Almuñécar and La Herradura if you take it in the direction of Malaga, and to Motril, Calahonda and Torrenueva if you take it. takes in the direction of Almería. The N-323 national road connects Motril with all the cities and beaches of the Costa Tropical.

There are many buses that leave every day from the Granada bus station to reach the most important cities of the Costa Tropical, such as Almuñécar, Salobreña or Motril.

For more information on the Costa Tropical of Granada visit the website: www.granadacostatropical.com

Alhambra: tickets, timetables, tours and information for the visit ❯

What to see in Alhama de Granada, an Arab joy

add a comment of The Tropical Coast of Granada