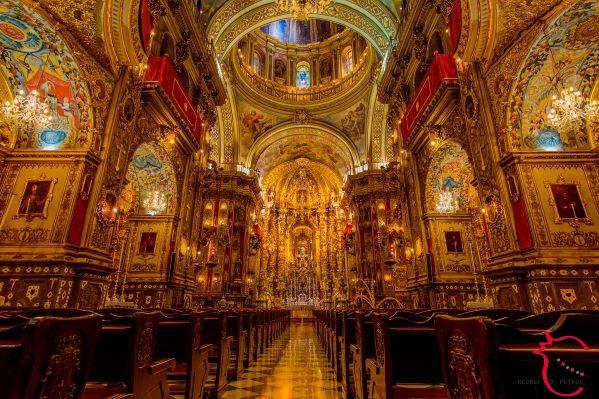 This magnificent Basilica was built on the initiative of Father Alonso de Jesús y Ortega who was prior of the hospital, founder of the spiritual movement and the cult of San Juan de Dios.

The church began to be built in 1737 and was completed without interruption in 1759 and was funded by the Hospitaller Order to house the remains of its founder, San Juan de Dios, born in Monte Mayor (Portugal) in 1495 and moved to Spain as a child .

It was elevated to the category of Basilica by Benedict XV through the papal bull “Exstat. Granatae ”, signed on December 20, 1916.


If the Cathedral of Seville is the largest Gothic cathedral in the world, the Basilica of San Juan de Dios is certainly the most baroque, whose artistic style is visible in the columns of the church and in the various sculptures it contains.

It has a Latin cross structure, two side chapels, a large central dome and an imposing apse, all wrapped in a dimension of saints, friezes, decorations, frames and mirrors.

The thing that stands out to the eye at the entrance is the large presence of solid gold that absorbs a large part of the structure creating a great luminous effect.

To admire the frescoes painted by Diego Sánchez Sarabia and "The altarpiece" of the main chapel created by José Francisco Guerrero between 1744 and 1753.

Inside the central apse above the altar is the Camarino niche, a room that jealously preserves the relics of the saint benefactor.

The Basilica of San Juan de Dios is the main spiritual center of the Hospitaller Order connected to it, whose worship is now widespread throughout the world.

Price: 3 €
Free entry: in Calle San Juan de Dios, 23, every 8th of the month (for the celebration of the anniversary of the saint's birth).