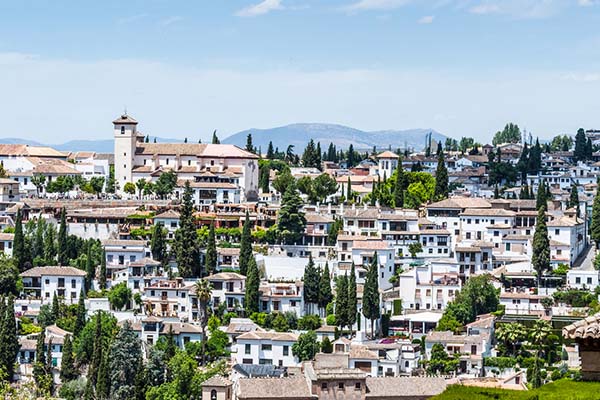 In all of Spain, suggestive neighborhoods such as theAlbayzin of Granada. Unesco heritage together with the Alhambra and Generalife, the Arab district of the city combines history, traditions and folklore, as well as being a paradise for photographers. If every corner suggests a single shot, come on mirador dell'Albayzin enjoying the best view of the spectacle of the Alhambra silhouetted against the peaks of the Sierra Nevada.

The river Darro separates two hills that face each other, confronting each other day after day. On one stands the fortress of the Alhamba, on the other the Albayzin. Both owe their current fame to the period of Arab domination. The development of this area under Moorish domination made the white district reach a population of over 60 inhabitants and in general the city of Granada was much more populous than it is now. The question that many are asking is: but if all Granada was Arab, why today only Albayzin is so well preserved? The answer lies in the morphology of the territory. The flat area of ​​the city - the one, to be clear, that winds around the cathedral of Granada - was razed to the ground by the Catholic kings to be rebuilt and gradually modified over time. However, it turned out to be much more complex to do the same in the hilly part, which was therefore left as it was.


Visit the Albayzin district: what to see?

This is certainly the area of ​​Granada in which, more than any other, it is worth getting lost. Exploring the twisted alleys, going up and down stairs and steep streets, turning every corner in search of a suggestive glimpse are the best things to do in this area of ​​the city. However, I will try to recommend a tour that allows you not to miss the major points of interest.

My suggestion is to start with Elvira Street, which starts from the point where Calle Reyes Catolicos (one of the main routes of the historic center) joins Plaza Nueva. Calle Elvira is one of the streets that I recommend you attend in the evening, as it is full of places to eat and drink something typical. If you get there during the day, better early in the morning, walk a couple of blocks and then turn right into Caldererìa Nueva Street.

Especially in the evening (which is why I recommend you come back later) you will find catapulted in another world, in a street that could easily be in a Moroccan city. Carpets and fabrics, jewels and lamps: many, many colored lamps. Objects of all kinds that reflect the best Arab craftsmanship, fill small shops where it is pleasant to enter even just to look around and smell the scent of incense. At any time of day or night, this street and the surrounding areas are perfect for entering a Teterìa, where you can savor one of the many types of tea and maybe have a few puffs of hookah.

Calmly, you will reach the San Gregorio Square, with its small church and - very often - its street artists who stop to play here. From here, the climb to the upper part of the district begins, with the beautiful Cuesta de San Gregorio. It is difficult to say which road is the best to take: as I anticipated, in this area they would all be worth seeing and if you have time, I advise you to move as much as possible. But if you turn left on the climb Grifos de San Josè Street, you can get to the enchanting in a few minutes Placeta de San Miguel Bajo, one of the most fascinating corners of the neighborhood. As you go up, you will also meet the cistern (Alijbe) of St. Joseph.

Arrived in the square, where a beer with tapas is not bad at all, take a small detour to the left, beyond the Croce of the Christ of the Lilies up to Mirador de la Lona. This observation point is one of the few that will allow you to observe Granada from above, while most of them face the Alhambra.

Back in Placeta de San Miguel Bajo, pass it and continue up Santa Isabel la Real Street, to stop after a few steps in the square called uphill Placeta Cristo Azucenas. Climbing up, you can reach and visit the Dar al-Horra Palace (opening hours 10-20 in summer, closes at 18 the rest of the year).

Continuing to walk on Calle Santa Isabel, turn left into the narrow Cuesta de Maria de la Miel and immediately right, until you reach the Saint Nicholas' lookout. Located in the square of the same name, with the church of the same name, the cistern of the same name and the homonymous bars and restaurants, the Mirador San Nicolas in Granada is certainly the best place to admire the Alhambra in all its magnificence. Most of the street performers who visit Granada also perform in this square, so entertainment is guaranteed.

The view from the San Nicolas viewpoint

Taking Callejon San Cecilio you will arrive atBow of Weights. The name of the arch is due to the fact that in the Long Square - which you will reach once you pass it - the market was held. Not all merchants were honest, and rigged weights, when confiscated, hung from this bow in plain sight.

After Plaza Larga, where there is a typical lively market, continue on Bakers Street, along which you can find economic alternatives to the tapas bars in the historic center. At the end of the road, having reached the church of the Savior, you can continue on Cuesta del Chapiz, which will allow you to reach two important points of interest:

After passing the Palacio de los Cordova, the descent ends in Father Manjon Walk, on which a large terrace immediately opens up, an excellent stopping point. Called the Walk of the sad, this place is actually very lively and will be a pleasant stopping point, in front of the fountain and in the shadow of the Alhambra.

The lower part of the Albayzin

Once you have regained your energy, the effort is not over yet: you are in the lower part of the Albayzin and from here some routes branch off worthy of a few steps, albeit uphill. Among these, Horno del Oro Street, where you can enter the patio of the Arab house.

Then turning left into San Juan de los Reyes street, you can go back down one of the following alleys, for example the very narrow alley Santisimo. You will thus arrive in Darro Race at the height of archaeological Museum and the parish of St. Peter and Paul. Turn right and follow the stream. It is certainly one of the prettiest streets in the area and along it you will also find the remains of the Cadì Bridge, as well as the visitable Bathtub, the Arab bath of Granada. A few more steps and you will be back in Plaza Nueva, where you started from.

The Mirador of the Albayzin: an exceptional view!

One of the best things to do in these streets is to discover all the observation points from which to admire the city and the Alhambra. I have already mentioned the most famous of all, the Saint Nicholas' lookout, in addition to Mirador de la Lona and Viewpoint of Santa Isabel la Real (Placeta Cristo Azucenas).

However, there are numerous other observation points scattered around the district. Among others, the Los Carvajales viewpoint (in the homonymous square) and the Ojo de Granada viewpoint (along Calle Cruz de Quito). If you want to walk (or take a bus) I suggest you go to the San Cristobal viewpoint, which is located along Carretera de Murcia, opposite the church of San Cristobal. This is one of the highest points in the Albayzin interior, and the view is breathtaking.

But the wider view is the one that offers the San Miguel Alto viewpoint. This open space in front of the white church, visible from all over the city due to its isolated position on the hill, is an observation point that will leave you speechless. Getting there on foot, especially under the summer sun, is no small feat, but it allows you to discover less touristy and hidden sides of the city, savoring the essentiality of Granada. If you enter the Albayzin from Puerta Elvira and go up from here, you will also skirt the ancient Nasrid wall.

The best cafes in Granada ❯

add a comment from The Albayzin of Granada: a walk to visit the secrets of the Arab quarter