Sultans for a night in the Parador of the Alhambra in Granada: an experience to try! 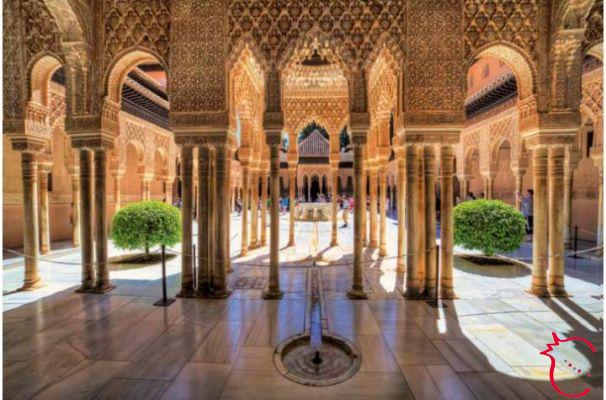 History and nature, culture and traditions. This is what you are looking for if you decide to stay in a Parador in Spain. But let's start from the basics: what is a Parador? Apparently, nothing more than a hotel, usually even of a very good standard. True, but the Paradores de Turismo de España, over 90 scattered throughout the country and owned by the Spanish state, they differ from other hotels for a very particular feature: almost all of them are located in buildings of great historical and artistic interest. Staying in a Parador you may find yourself sleeping in castles and ancient palaces, typical houses or convents.

And it is precisely from an ancient convent that what is perhaps the most visited Parador in Spain has been obtained, due to its inimitable position inside the walls of the Alhambra. We have already mentioned it in our article where to sleep in Granada - which I recommend you browse if you are looking for alternatives for all budgets - but here we try to better understand what it means to spend a night at Parador di Granada.

Sleeping on the Alhambra: the parador de Granada

How did the Nasrid rulers feel when they woke up in the morning inside the Alhambra, being able to stroll through the sumptuous gardens and admire their Granada from above? Why ask yourself this question when the answer is at hand? It is not impossible to spend the night in one of the most visited places in Spain and defined by many as one of the wonders of the world. The Parador de San Francisco (said Parador of Granada) gives us the opportunity to feel, at least a little, like sultans in their own kingdom.

Built in the sixteenth century on the remains of an Arab palace, what it is today the Parador de Granada it was actually a convent. To want this convent were the Catholic kings, who were buried here. The remains of Isabella and Ferdinando were originally placed in a chapel near the cloister of the convent and only later transferred to the Royal Chapel. Located in the upper part of the Alhambra, between the archaeological excavations of the Palacio de Abencerrajes and the gardens of the palaces in the Partal, it is easily accessible and recognizable along Calle Real. This is certainly one of the most suggestive places to stay in Granada, but even if you will be sleeping in another area of ​​the city, look into the hall del Parador, to admire the gardens with flower beds and rose gardens bordered by geometric hedges, as well as the fountain and the beautiful mosaic pavement.

Some parts of the old convent are can also be visited without staying overnight here. In addition to the beautiful patio, you will be able to admire plaster decorations of arches and walls, windows and mocarabic ceilings: the Arab architectural art has been integrated with the Christian style to make this place of stay unique, giving visitors the opportunity to fulfill the dream of sleeping in a Moorish style palace, a stone's throw from the residences of the sultans.

The rooms and services of the Parador of Granada

The interior of the Parador it combines Arabic and Christian styles with classic furnishings, paintings and the utmost attention to detail. The rooms are all different and offer a view of the buildings that make the Alhambra unique. The Parador has 25 twin rooms, 10 double rooms and 5 suites. All the rooms they are equipped with the services of a high standard hotel and combine traditional architecture with modern furnishings. From the perforated wooden windows you can admire the view, while taking advantage of wifi, satellite TV, minibar and music. The restaurant offers traditional cuisine, where you can taste the most typical dishes such as Gazpacho or Pollo alla Alpujara, perhaps having dinner on the terrace with a breathtaking view.

Alternative to the Parador de Granada

As I mentioned, the rooms in the Parador are not many. Given the uniqueness of the place, it is very difficult to find a place, especially in high season, if not booking well in advance. However, there is a valid alternative to sleep inside the Alhambra. This is theHotel America, which however must be considered a second choice. Located on Calle Real, this 1800th century building offers 17 retro-style rooms, with single, double and family rooms available.

If the Hotel America is full and you don't want to give up, just outside the walls stands theAlhambra Palace Hotel. This 4 star hotel is one more option luxurious to spend the night alongside the Alhambra. A total of 126 rooms are available: it goes without saying that here it is easier to find a place and you still have the possibility to sleep in wonderful spaces, set up following the style of Arabesque architecture and embellished with Moorish furnishings, particularly cared for in the common rooms. Noteworthy is the cuisine of the restaurant, the quality of which is equal to the level of the hotel. As there is no space for cars in the immediate vicinity of the hotel, the hotel staff will move the car as needed. In short, all beautiful and prestigious: obviously the fact remains that spending the night in a historic building like the Parador of the Alhambra in Granada it has a whole other charm.

Lanjaron spa town in the province of Granada ❯

add a comment of Sultans for a night in the Parador of the Alhambra in Granada: an experience to try!