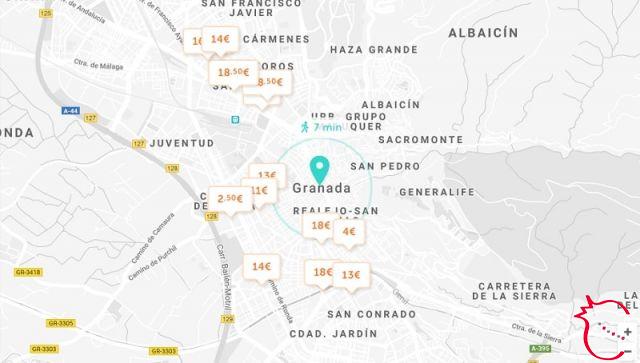 Parking in Granada. Are you looking for a car park in Granada where you can park your car for a few days?

In the city of Granada it is not always easy to find parking in the center. Access to main roads such as Gran Vía, Recogidas, Plaza Nueva, Reyes Católicos, Calle Elvira, San Matías and the Albaycín and Sacromonte districts are limited to private traffic.

In some areas, such as Plaza Nueva and Realejo, access is restricted by mobile pillars and surveillance cameras and only accessible to residents, taxis and public transport.

It is best to leave your car in a public parking lot for just over 1 euro per hour or park your car in areas further away from the center and use a bus to get to the city.


Here is some information on the main car parks in Granada. Let's find out.

The 24-hour guarded Alhambra car park is located within the gardens of the Alhambra, has four areas, for a total of 24 spaces. It has spaces for caravans and is the only one in Granada that allows tourist buses to park. There are almost always places available.

Parking in Granada, ideal for parking in the Neptuno shopping center. The APK2 Arabial car park is located on via Arabial, which can be reached from Plaza Gerardo Cuerva. This secure car park in Granada is located a few minutes' walk from García Lorca Park, near the shopping center as well as the San Emilio parish, on the other side of the Camino de Ronda. Also, near the Genil River, you will find the Inmaculada hospital.
BOOK APK2 ARABIAL PARKING


Parking in the center of Granada with space for 784 vehicles, possibly the cheapest in Granada:

Car park in the center of Granada, located next to Plaza de los Lobos and Plaza de la Trinidad. A 2-minute walk from the AUSSA Hermanos Maristas car park is the Botanical Garden of the University of Granada, where you can enjoy a relaxing day surrounded by nature.

The AUSSA Hermanos Maristas car park offers you the opportunity to park near the Royal Chapel of Granada or near Plaza Isabel La Catolica, both located less than 10 minutes' walk from the car park.

Parking in the center of Granada, open 24 hours a day and ideal if you want to leave the car to move freely around the city.


The APK2 Escolapios car park is located a few steps from the Genil river, crossing which you will find yourself in the characteristic Plaza del Humilladero garden, with the Fuente de las Granadas, where you can relax while strolling along the Paseo del Salòn.

Leaving the car at the APK2 Escolapios car park, you will also be no more than 15 minutes on foot from various panoramic points of the city, such as the Placeta Puerta del Sol, from which you can admire the Alhambra, as well as near Piazza Isabella la Cattolica and to the Cathedral of Granada.

The APK2 Escolapios car park offers constant surveillance for the safety of its customers, so you can park in Granada with complete peace of mind!

Places are not always available.

Car park in the Albaicín neighborhood, near the Nazarí de Dar al-Horra palace and García Lorca Park. An 8-minute walk away is the Monastery of San Jerónimo, the Cathedral of Granada and the Capilla Real de Granada. At the same distance are La Madraza, the Plaza Nueva, the Sefardí Museum of Granada and the Calle Navas, famous for its bars and tapas.

The La Carrera - Realejo car park is located in Calle Nicuesa 9, in the center of the city, so it is important to reach it by following these indications, to avoid fines driving in the restricted traffic area.

You must reach the car park from the south of the city, coming from any of these directions: from Paseo del Violón, Paseo de los Basilios, Paseo de la Bomba or Paseo del Salón. All of them will take you to Calle Estepona, from which you will just have to continue straight on until Calle Nicuesa. In this car park it is necessary to leave the car keys.
BOOK LA CARRERA - REALEJO PARKING

The car park is located on the Avenida de la Constitución in Granada, in the Plaza de Toros-Doctores-San Lázaro district, near the tourist center of the city and 5 minutes from the train station.

Nearby is the Hospital General Virgen de las Nieves, the San Cecilio University Hospital and the Complejo Administrativo Los Mondragones (Municipality of Granada).

It has 900 seats on 3 floors and offers season tickets multi-day e settimanali at special prices. Seats are usually available.

Car park in Granada, in the north of the city, open 24 hours a day and located next to the symbolic Plaza del Triunfo.

Also 10 minutes from the Triunfo car park you can also reach the Fuentenueva Campus of the University of Granada.

The APK2 Triunfo car park is also ideal for visiting the Triunfo Gardens, the Basilica of San Juan de Dios, the Monastery of San Geronimo, and three spectacular panoramic areas such as the Mirador San Nicolas, the Mirador di San Cristobal and the Mirador de la Lona and all less than 10 minutes walk from the car park.

Also 10 minutes away you can also arrive at the Granada train station, from which you can reach the most beautiful places in Andalusia.

This car park is located in Calle Arabial 56, which, although not the heart of the city, is still a great area to park in to avoid traffic a bit. Also, leaving your car here you will not take more than 15 minutes on foot to reach the historic center.

You will have no problem reaching the Cathedral of Granada, visiting the surroundings with the Fuente de las Batallas, the different churches in the area and even the Alhambra! After all, a few more minutes on foot is nothing to be able to visit this incredible palace!
BOOK ALSINA PARKING

The San Lázaro car park is located in Granada at Calle Don Emilio Durán Durán 4, very close to the Avenida de la Constitución and the Avenida de Madrid. It is open and supervised 24 hours a day. In the surrounding area you will find the Faculty of Medicine, the Plaza del Triunfo, the San Cecilio University Hospital and the Plaza de Toros.
BOOK PARKIA SAN LAZARO

Parking in the center of Granada, the APK2 Puerta Real car park, located on Plaza del Campillo, is just a 7-minute walk from the Cathedral of Granada, the Royal Chapel of Granada, the Sagrario Church and Isabella la Cattolica Square, as well as to be also incredibly close to the Corral del Carbon, Trinidad Square and the Granada Tourist Office, which will advise you on the most beautiful places to visit in the city.

If you want to park safely in the center of Granada, the APK2 Puerta Real car park is one of the best options because, in addition to being open 24 hours a day, it is only 24 minutes walk from the famous Alhambra, symbol of Granada the Palace of Charles V, the Nazaries Palace, the Patio de los Leones and the Generalife Theater. If you want to park near the Alhambra in Granada then the APK20 Puerta Real car park is right for you.
BOOK APK2 PARKING PUERTA REAL

Car park in Avenida de las Fuerzas Armadas 2, located in front of the main entrance of the Virgen de las Nieves Hospital in Granada and under the surgical block of the same hospital. Open 24 hours a day. It has 24 pedestrian entrances, all with lift, and 5 of which have direct exit to the upper square located in front of the main entrance to the hospital.
PRENOTA PARCHEGGIO IC HOSPITAL VIRGEN DE LAS NIEVES

If you think that parking in Granada during your trip will be an impossible task, it is because you still do not know the car park of the Hotel Ibis in Granada, on Calle Graham Bell 3. True, it is not located in the city center, but precisely for this will be much easier to reach by car, coming from the nearby A-44 motorway.

You won't have to complicate your life by driving around Granada, and you can enjoy the wonders of this Andalusian city on foot. The Ibis Granada car park is open 24 hours a day, is monitored and is located less than 24km from the Nuevo Los Cármenes Stadium, where Granada CF plays its home games. If football is not your thing, and you prefer shopping, then you will be pleased to know that from the parking lot you can walk to the Nevada Shopping Mall in about 2 minutes.
BOOK PARKING IBIS GRANADA

If you are looking for a parking space near Granada Airport we suggest the official airport parking.

Parking at Granada Airport, managed by AENA. This is the official car park of the Granada - Jaén Airport, which offers the best service if what you are looking for is a car park near the Federico García Lorca Airport of Granada, where you can leave your vehicle safely before taking a flight.

Therefore, if you are planning a trip from Granada Airport, the AENA Aeropuerto de Granada - General P1 car park offers you its structure with covered parking spaces, to allow you to park without waiting right in front of the Granada - Jaén Airport terminal. .

Remember that in the city of Granada you can park a camper, but you cannot stay in the same place for several days. You have to change the place where the camper is parked.

There are neighborhoods such as Albayzin, Sacromonte or the center where campers do not enter due to their size, so it is better to park in the neighborhoods a little further away. Many campers park around the bus station area.

As already mentioned, the only car park that has an area for tour buses is the Alhambra car park (see above).

If, on the other hand, it is a question of short stops to let tourists off, we suggest 4 docks.

- Fuentenueva Avenue: this stop is located near the Cathedral, maximum stop: 10 minutes. If you come from the A44 motorway, take exit 128 (Méndez Núñez).

We just have to wish you good parking.