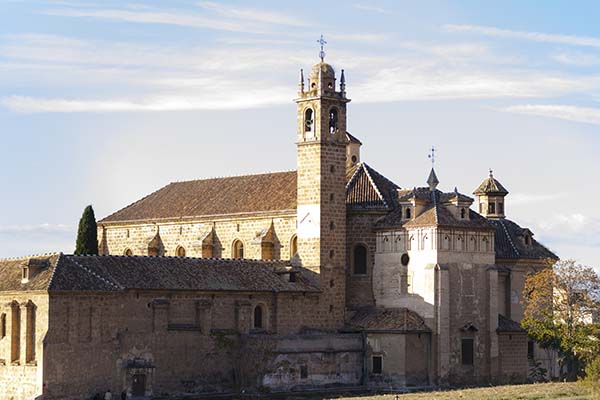 Don't miss the Cartuja Monastery in Granada, the inconspicuous exterior hides a baroque marvel of great richness and refinement.

The Carthusian Monastery of Granada is located on the hills of Aynadamar, a place full of beautiful gardens and orchards irrigated by the water coming from Alfacar.

Muslims set up their rural houses there, where they celebrated splendid banquets.

According to L. Marmol, the term Aynadamar means “Fountain of Tears” and refers to the irrigation canal of the same name that crosses them, bringing its waters from the nearby village of Alfacar and supplying part of the Albayzín district.


Today the environment has radically changed due to the university buildings and homes that have been built around it.

The entrance to the Monastery has a facade (built in the XNUMXth century by Juan García de Pradas) consisting of a semicircular arch, on which there is a niche that houses the image of the Virgin.

From the entrance we reach a large courtyard, at the end of which a wide staircase leads us to the entrance of the church.

The church (XNUMXth century) has three access doors: one for the faithful and the other two, communicating with the convent, were for monks. The plant has a single nave divided into four sections.

In the presbytery, covered by an elliptical vault, the main altar stands out. It is a gilded wooden altar. The dome that covers this space is decorated with frescoes by Antonio Palomino (XNUMXth century), a native of Cordoba.

The sacristy is to the left of the presbytery, has a rectangular plan divided into four sections and covered with semicircular vaults (the first three and the last elliptical).

The Sala Capitular de Legos is the oldest building in the monastery (1517). It has a rectangular plan and is covered by a cross vault. The canvases are the work of Vicente Carducho, with themes drawn from the life of the Carthusians.


In the gallery of the courtyard, next to the nave of the church, there are four chapels, each of which houses an "Ecce Homo" which represents Christ only after the scourging, with a crown of thorns, hands joined and tied with the rope that descends from the neck.

Free entry: Thursday from 15 to 15:30 pm.
Free tickets can be booked 24 hours in advance from this site:
entradasgratuitas.diocesisgranada.es

add a comment of Monastero di Cartuja to Granada