Loja and the Christian conquest of the Kingdom of Granada 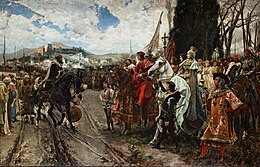 If you live in Granada or are visiting Andalusia as a tourist we suggest Loja municipality which represents the Christian conquest of the Kingdom of Granada.

Loja is a city that in the past controlled the communication links between Granada and Malaga. It is the most important city in the region due to its long history, the number of inhabitants and its vast territories.

It is located in the Río Genil valley and opens onto the Sierra Gorda and Mount Hacho. A number of archaeological remains from the Bronze Age and the Muslim period have been found in its territory, including the ruins of its medieval citadel and the fortified wall that surrounded its old medina.


Loja was the door and the key to the Kingdom of Granada in the eyes of the Catholic monarchs. Loja's Arabic name, Medina Lauxa (literally meaning City of the Guardian) refers to its strategic importance and the crucial military role it played during the Christian conquest of the Kingdom of Granada.

The water flows from the Sierra de Loja to the Río Genil, from which numerous fresh springs emerge. The abundance of water can also be seen in the Paraje de Los Infiernos (photo), a natural monument formed by spectacular waterfalls.

In addition to its historical and architectural heritage, the Sierra de Loja offers walks and trails in a breathtaking environment, such as the Charco del Negro. It is also the ideal place for paragliding, the Vuelo Libre de Loja station is famous as the starting point and the Venta del Rayo as the landing area.

According to legend, Loja was founded by Noah's nephew, Tubal, and was called Alfeia. During the period of the Phoenicians, in the eighth century, it was called Tricolia, it was a very prosperous city. The Romans under Scipio changed the name to Lascivis (which means the place of rushing waters).

It played an important role in the civil wars of the Caliphate of Córdoba and later acquired a decidedly military character. It was used to guard the plains and was at the forefront of defending the Nasrid kingdom.


The municipality of Loja, an important communication hub, has managed to maintain and take care of a good number of customs and traditions.

Also to be remembered are those of a gastronomic nature: such as beans in abundance, remojón of oranges, gazpacho and the famous roscos or saint's bones.

Popular cuisine and the most elaborate culinary arts coexist in the gastronomic offer of Loja. In particular, it is necessary to underline the importance of the trout which has its particular paradise in the Rio Frio annex together with the recent marketing of sturgeon and its beluga caviar.

The paths of the Al-Andalus heritage ❯