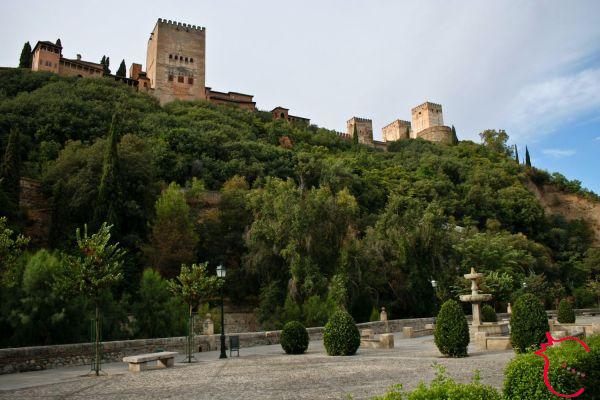 Do you want to walk in one of the most suggestive places in Granada? We recommend going to see the Paseo del los Tristes!

The Paseo de los Tristes stretches between the Alhambra and the Albayzin, along the Darro river, between tapas bars, some narrow streets and very nice little houses. It is one of the essential routes when visiting Granada, as it offers a unique view of the Alhambra from below.

Palaces, churches, convents, museums and medieval buildings surround this path making it the ideal place to sit and rest or to enjoy the beauty of Granada. But where does his sad pseudonym come from?

Its official name is the Paseo del Padre Manjón (formerly Paseo de la Puerta de Guadix), but this "sad" nickname is due to the fact that in the XNUMXth century it was the road to the cemetery of San José (which was accessed by climbing for the Cuesta de los Chinos).

The funeral processions crossed the Paseo del Padre Manjón and many people greeted their deceased loved one here for the last time before climbing the hill towards the Sabica (where the cemetery stood).

The land where the Paseo de los Tristes is located was originally owned by the Lords of Castril. Following a serious explosion in a gunpowder workshop, it was decided to build this beautiful path to also facilitate access to the Sacromonte district.

The fountain that occupies the center of the Paseo de los Tristes was built in 1609.

At the beginning of the Paseo de los Tristes there is an imposing sculpture; and the flamenco dancer and choreographer Mario Maya (Cordoba, 1937- Sevilla, 2008), national dance award and gold medal of Andalusia, who forged his successful career in the Sacromonte tablaos and to which the city of Granada wanted to pay tribute in the year 2014.

The Paseo de los Tristes can be reached by minibuses C1, C2 and C3, more information on Alhambra Bus, but our suggestion is to walk it starting from Plaza Nueva or descending from the Albayzin district along the Cuesta de Chapiz.

Albolote, to discover the remains of Roman villas and vestiges of the Paleolithic ❯