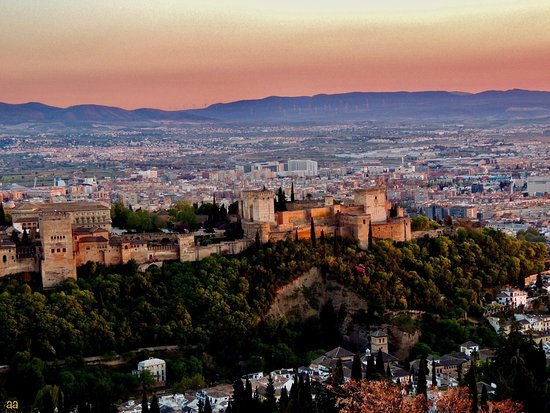 If you are visiting Granada or reside in the Andalusian city and would like to admire the highest point of the Albayzín, you cannot miss the Mirador de San Miguel Alto!

The Mirador de San Miguel Alto offers a spectacular and unique view of the whole city, a place where you can spend several hours contemplating the landscape.

On the left you can admire the wonderful Alhambra complex, in front of the white Albayzín district and on the right a spectacular panorama of the Sierra Nevada.

Going up a long staircase that runs alongside the famous Granada "cuevas", you reach the belvedere where many people go every day to spend moments of relaxation and carefree.


Here was built one of the largest Nasrid towers in the entire defensive area of ​​Granada. It was called the Aceituno tower, because tradition said that it was built on the ancient land of a Christian church in whose perimeter there was a legendary olive tree, capable of flowering, bearing fruit and ripening in a single day.


The tower was demolished in 1671 to erect a hermitage to the archangel San Michele, in memory of the early Christian temple. Enlarged in the XNUMXth century, it was destroyed by French troops and rebuilt in subsequent years in a style of little artistic relevance.