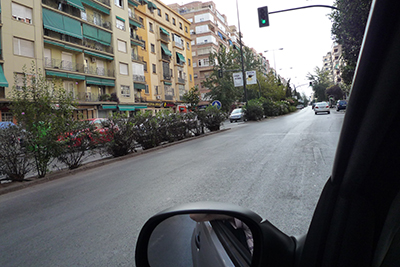 If you are thinking of coming to Granada but don't know how to get around the city, don't worry! In ForGranadaLovers we have created a list with the best transports in Granada so you can move around the city without worrying. Let's get to it!

Here's a tip: put on a pair of comfortable shoes and walk. Raise your eyes, look around, be surprised. Isn't this the purpose of a trip? Granada is the ideal place.

Getting around Granada by bus

In the city of Granada there is an efficient public and tourist bus line that runs from 6.30 am to 11.00 pm and will make it easy for you to get to the different places of interest. You will recognize these means of transport by their characteristic red colour.


A single bus ticket costs 1 €, while if you want to make more than one trip you can use the pass which costs 5,45 €. If, on the other hand, you want to make a visit from the old Granada to the Alhambra you have to take bus number 32. Another route you can choose is the one called " Destino Alhambra".

Bus number 30 from Plaza Nueva to the Alhambra, while number 31 leads to the Albaicìn quarter. Also, if you intend to go shopping there is bus number 3 which takes you to the main shopping streets of Granada, from the station Avenida de la Constituciòn, with stops at Gran Vìa, and Plaza Isabel la Catòlica.

There are two types of tourist buses in Granada: the Granada Monumental and the Romantica. Included in the ticket you will also have headphones to listen to the guide's commentary, multilingual and individual. This bus may be the best way to get to know Granada.

Getting around Granada by taxi

Getting around Granada by car

It is very difficult, if not impossible, to get around Granada by car, which is still the best way to get to know the surrounding area, such as the enchanting Sierra Nevada and the rest of the cities of Andalusia.

The 9 most famous traditions of Granada ❯

add a comment from How to get around Granada