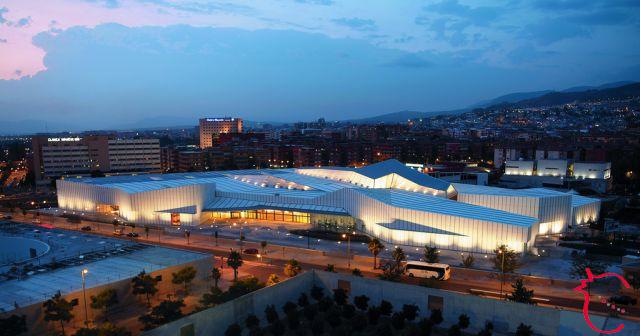 On your trip to Andalucia, don't miss the Science Park of Granada, an interactive museum of over 70.000 m2, located just a few minutes' walk from the historic center of Granada.

With more than 7 million people, this museum structure has become an international reference center for scientific dissemination in Southern Europe.

Located just a few minutes' walk from the historic center of Granada, the Science Park is open all year round, from Tuesday to Sunday and offers really interesting permanent activities and exhibitions.


The Science Park is managed by a Public Consortium formed by the Departments of Education; Environment and territorial planning; Economics and Knowledge and the Institute for the Prevention of Occupational Risks of the Giunta de Andalucía; the city of Granada; the provincial government of Granada; the University of Granada; the Higher Council for Scientific Research and the Caja Granada Foundation.

Macroscope Building:
Travel pavilion in the human body
A journey from the origin of life to human anatomy.
Al-Andalus and science pavilion
The scientific and technological legacy of Al-Andalus at your fingertips.
Culture of prevention pavilion
Improve the perception of risks at work and in daily life.
Techno-forum pavilion
A space for new technologies, innovation and art.
Sala explores the attic of the museum
Bring science to childhood through discovery and exploration.
Temporary exhibition pavilion
Large national and international exhibition productions.

Foucault Pendulum Building
Discovering the fragile balance of our planet, multiplying in the infinite tunnel and grabbing one's shadow are some of the proposals of the leaves Biosphere
Perception and Eureka
The Explore Room to learn about science from an early age.
Planetary
Experience an exciting journey through the Universe with the projection of over 7.000 stars.

Pavilion of Natural Spaces
All about the natural spaces of Andalusia, the environment and its conservation.


External
The museum offers outside other spaces of interest with the Botanical Paths, the Astronomy Garden, the Astronomical Observatory, the Mental Gymnastics Tent, the Dynamic Sculptures, the Energy Zone, the mechanics and perception modules and other games. outdoors.

Observation Tower
A viewpoint overlooking Granada, where you can experiment with science and technology.
Tropical Butterfly
See the life cycle of butterflies live. Over 20 different tropical species.
Raptors in Flight Laboratory
Learn about the ecology and biology of birds of prey.

Biodomo
The Biodomo is a space dedicated to education, conservation and research of biodiversity on the planet. BioDomo recreates the climate of the tropical fringe and hosts more than 250 species of animals and plants.


Timetables:
From 10.00 to 19.00, from Tuesday to Saturday.
From 10.00 to 15.00, on Sundays, public holidays and Monday before a holiday.
Closed: 1st January, 1st May and 25th December.
Every Monday (except holidays and days before holidays).
Planetarium: confirmed at the ticket office; about one show every hour.

How to reach the Science Park:

On foot: about 15 minutes from the center.

In the car: from the Camino de Ronda and the ring road.