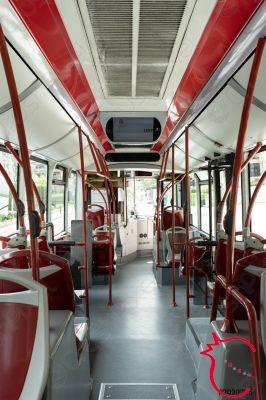 Are you in the city and want to get around with the city buses of Granada?

Granada is a relatively small city (around 235.000 inhabitants) that is easy to visit on foot, but if you have little time or are tired you can use the urban transport network.

Granada city buses are in fact a convenient way to get around the city, including if you want to visit the Alhambra, Albayzin and Sacromonte.

There are 28 urban bus lines in Granada. All of these bus lines operate seven days a week from 6:00 in the morning until midnight, including Sundays and holidays.


LAC (Línea de Alta Capacidad): it is the only one that crosses the city center, with a very high frequency (from 3 to 5 minutes).

Alhambra, Albayzín and Sacromonte lines: There are four microbus lines (C1, C2, C3 and C4) that arrive in city streets which due to their characteristics (very narrow streets) cannot be crossed by larger city buses:

A single bus ticket costs € 1,40. The ticket for the night bus costs € 1,50. Another possibility are called rechargeable subscriptions Credibús o Bonobus, available in three modes of your choice: from 5, 10 and 20 €. They are transferable and allow free line changes for a period of 45 minutes.

When purchasing the season ticket for the first time, a deposit of € 2 must be paid, which will be refunded later when the card is returned. The various travel tickets can be purchased directly from the bus driver.


There is also the Granada Card Tourist Pass which, in addition to providing concessions for access to the main monuments, allows you to take advantage of a reduction for urban bus lines and a 24-hour ticket for the Tourist Train, which is valid for five days at a cost of € 40 or for three days at a cost of 37 € and includes a ticket for the daytime visit of the monumental complex of the Alhambra and the Generalife.