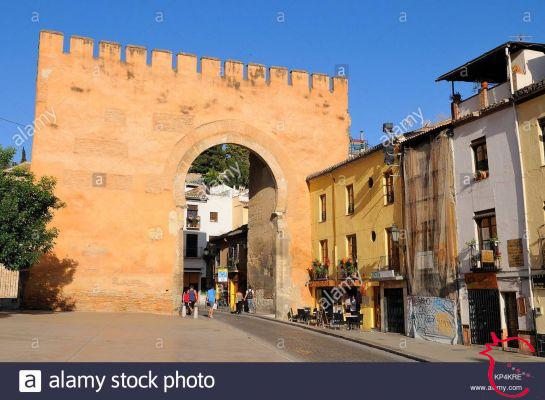 Have you visited the Puerta de Elvira in Granada?

The Puerta de Elvira or Arco Elvira is one of the most emblematic historical-artistic monuments of the urban evolution of the city, as it was the main gateway to the city of Granada during the Islamic domination. It is an exceptional legacy of Hispano-Muslim military architecture.

Its name derives from the connection of the road that led to the primitive capital of Granada, the disappeared Elvira, with the homonymous road (zanaqat Ilbira), the longest road in the city.

Due to its strategic position located in a flat area and as the main access to the city, the Puerta de Elvira over time became a real gate-fortress.


Its construction represents two historical phases: the Zirí period in the 1333th century and the Nasrid period under the rule of Yusuf I (1354-XNUMX).

Also in the Nasrid period, the external monumental arch was erected, which resembles the large doors preserved in the mid-XNUMXth century, such as the Puerta Rambla (Bab al-Ramla) and the Puerta de la Justicia in the Alhambra (Bab al-Saria).

In 1612 the three guard houses were demolished, the space in front of the door was enlarged and twelve houses were erected next to the wall, which have remained practically unchanged until today.

During the French occupation, parts of the wall and several iron-plated doors were destroyed, including in 1979 the iron gate (bab al-Hadid) also known as Puerta de la Cuesta (bab al-Aqaba), added in the XNUMXth century to communicate the medina with the Albaicín.

During the 1902th century, the Puerta de Elvira underwent various restoration and consolidation works. In 1957 by Mariano Contreras, in 1990 under the direction of Francisco Prieto-Moreno and in 2001 by Antonio Almagro Gorbea and Antonio Orihuela Uzal. Furthermore, since XNUMX a new intervention project has been opened on the door and on the adjacent walls.


On the other side of the arch begins Calle de Elvira which ends in Plaza Nueva. Since 1896 the Puerta de Elvira has been declared a National Historic-Artistic Monument.

add a comment from Gate of Elvira to Granada