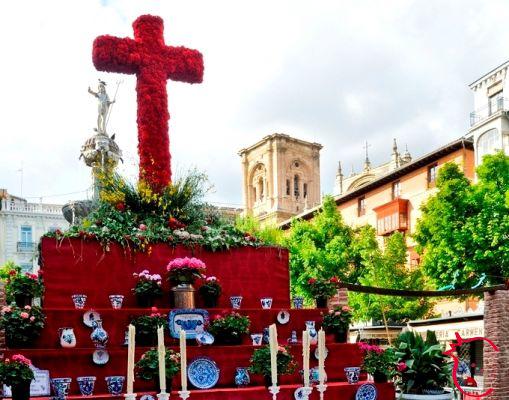 Do you want to discover the main festivals and traditions in Granada?

The magical atmosphere of Granada is strongly reflected during the celebrations that throughout the year keep the roots and traditions deeply rooted in popular culture. There are many festivals in Granada both religious and pagan or cultural; here we will talk about the most important.

Gennaio - Day of the Taking

January 2 commemorates the capture of Granada by the Catholic kings in 1492. Granada was the last Muslim stronghold on the peninsula. On this day, official acts such as the traditional “tremolación del pendón” take place in the Royal Chapel and in the Town Hall.

February 1st is the day of Patron Saint of Granada: San Cecilio.

Although he is the patron saint of the city, this day is not a holiday, so the holiday is celebrated on the first Sunday in February. On Sundays, thousands of people go up to the Sacromonte on a pilgrimage to the place where the catacombs of the Patron Saint are located.

Visiting the catacombs and the Sacromonte Abbey is a deeply felt tradition. Following the celebration of the official mass, a great popular festival takes place throughout the day in which “la Reja” (regional dances) are sung and danced and beans and “salaíllas” are distributed free of charge. This popular pilgrimage has been taking place in Granada since the beginning of the XNUMXth century.

San Cecilio was sent with Isio and Tesifón from San Pietro to Spain to evangelize the Romans. When they gathered in the Sacromonte catacombs with nine other priests, they were surprised by the Romans and martyred. His disciples wrote the story on a lead plate and hid it between two stones (one white and the other black) which were thrown into the Darro River. The plates found in 1595 were sent to Rome where the originals are kept, in order to confirm their authenticity. From this event, the Sacromonte Abbey was born on the catacombs.

In ancient times, during the pilgrimage, young girls of marriageable age had to touch the white stone if they wanted to get married; while touching the black stone meant the opposite.

Holy Week in Granada is an incredible religious event and is distinguished by the beauty of the processions. It was declared a Festival of International Tourist Interest.

Brotherhoods of various neighborhoods in silence with tunics and hoods perform in processions through the neighborhoods of Zaidin, Realejo, Albayzin, in the historic center, with the sole aim of bringing the message of Christ crucified, dead and risen to the spectator.

The streets of Albayzín, for example, are the ideal stage for the Virgen de la Aurora or the Concepción which become almost human as they pass through the neighborhood.

Seeing the Cristo del Silencio or the Cristo de los Gitanos for the Carrera del Darro under the moonlight and with the Alhambra illuminated behind it is undoubtedly a highly suggestive scene.

In addition, the Santissimo Cristo de los Favores (in the neighborhood of the brotherhood of the Realejo) or Santa María de la Alhambra are processions not to be missed.

Maggio - Day of the Cross

On May 3, one of the most popular festivals in Andalusia takes place in Granada: the Day of the Cross. On this day the streets, squares and even the shop windows of the city are decorated and filled with wonderful altars in honor of the Santa Cruz.

This festival, which annually attracts thousands of visitors from all over Spain, has pagan and Christian origins. It seems that the first celebrations in Granada of the Day of the Cross, as they are known today, date back to the XNUMXth century.


Later, the tradition continued in more typical neighborhoods, such as Albayzín and Realejo, and children began to build small altars decorated with Manila shawls, pottery and copper objects.

Today many of these traditions have been preserved, including that of placing a "pear tree" somewhere on the altar (as the golden apples are called in Granada). It is common to see children and the elderly dressed in typical flamenco costumes throughout the city.

Neighborhood associations, guilds, schools and even the town hall organize their own cross and compete to grab the attention of visitors.

Albayzín crosses, such as the Plaza Larga, the Casa de los Pisas or the Casa de la Asociación de vecinos on Calle Zafra, have won the first prize on several occasions. You should also visit the Realejo, especially the Corrala de Santiago.

Stroll through the center and enjoy the atmosphere in Plaza del Carmen, Plaza Bib-Rambla or Plaza de las Pasiegas, where you will encounter musical performances during the afternoon and evening.

In the course of history, following the ban on asking for money for crosses (in 1883), the festival almost risked extinction.

Although the tradition remained muted for many years, in 1924 it resumed thanks to a competition of altars by the Town Hall, and was definitively restored to the city's calendar as a big day starting in 1964.

Corpus Domini is perhaps the largest festival in Granada. For a week, the festivities fill the city with the Feria de Granada. During the Feria there are flamenco shows, puppet shows in Plaza Bib-Rambla, processions and much more. Corpus Domini in Granada is usually celebrated in June, although the exact day of the festival depends on Holy Week. You can find the exact date by counting 60 days from Easter Monday.

Two important processions pass through the streets of Granada during the week of Corpus Domini: the Tarasca procession and Corpus Christi procession.

The first is very particular and pagan in character. It begins on Wednesday and represents the figure of a woman walking on a dragon, accompanied by giants and large heads. It is the favorite party of children. The figure of the Tarasca symbolizes the triumph of good over evil, of beauty over the beast. There is a lot of expectation and mystery surrounding the model Tarasca will wear every year.

The other is the Corpus Domini procession which gives the festival its name. It is solemn and religious, and goes out on Thursdays. It is one of the most important days on the local calendar. In the Corpus Domini procession the Eucharistic cult is celebrated, and to this end the Custody is accompanied through the main streets of Granada and along the way there are altars. The first Custody was donated to the city by Queen Isabella the Catholic. This procession is very long, since in addition to the Custody and Tarasca, all the local and ecclesiastical authorities, parishes, brotherhoods, public and private institutions parade.

A week earlier, las Carocas are placed around Plaza Bib Rambla, near the Cathedral, so that Granada residents can read and comment on them. They are also published in the local press. These are drawings or rather caricatures, highlighting the main local and national events that took place throughout the year in terms of humor. They are accompanied by allusive verses (quintilles) which are placed under the drawing on large panels. This tradition dates back to the XNUMXth century and from the XNUMXth century onwards it was located in the Plaza Bib-Rambla.

The month of September in Granada is the month of the Virgen de las Angustias, patron saint of the city. The feast of the Virgen de las Angustias is very popular and arouses great devotion among the people of Granada, during the thirty days of the month all the local guilds of Granada go to the basilica to venerate it. These are festivals that normally attract a large number of visitors from all the cities of the province and in which the popular fervor together with the festive atmosphere paint a unique image of the city. On the day of the procession the center of Granada is full of stands offering a great variety of autumn fruits and the traditional Virgin cake.

Around September 29, several events are held in the Albayzin neighborhood to honor the patron saint, San Miguel. In those days the traditional pilgrimage to Cerro dell'Aceituno takes place up to the hermitage of San Miguel Alto with decorated horses and chariots. The view of the city from the hermitage is breathtaking.

At Christmas, Granada is full of lights and colors and the city is transformed. During the holidays, many activities, shows and typical festivals are organized: crib contests, Christmas concerts, Christmas markets with sweets from the convents of Granada, flamenco shows, parties and decorations in different places in the city.

The Christmas and New Year celebrations are an exceptional time to get to know the more festive side of the city and take advantage of the opportunities that lurk around every corner. It is the best time to enjoy the Sierra Nevada and combine the leisure activities offered by the city with the practice of skiing in the ski resort near Granada.

We just have to wish you happy holidays in Granada!

add a comment of Festivals and traditions in Granada