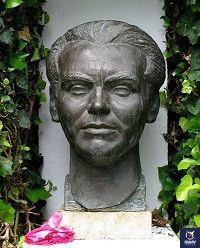 Do you want to know more about the life of some famous people of Granada?

Below is a small list of characters who have made the history of the city of Granada.

He was a Spanish flamenco singer.

Born in Granada, he moved to Madrid at 18, where he was known as Enrique El Grananino. In the Spanish capital he collaborated with several important exponents of flamenco: Pepe de la Matrona, Bernardo El de Los Lobitos, Manolo de Huelva and others.


In 1960 he became a professional musician and began a long journey characterized by artistic creativity. He renewed the world of Spanish flamenco starting with the recording of Homenaje Flamenco to Miguel Hernandez.

In the second half of the 60s he collaborated on the staging of La Celestina with Antonio Robledo and his wife Susana Audeoud. In the 80s and 90s he was very active in the theater and in the ballet field, collaborating with important Madrid directors and choreographers.

He has composed music for Martin Recuerda, Jose Luis Borau and others. In 2005 he received the medal of Andalusia and in 2006 the gold medal of merit in fine arts. He died in 2010 in Madrid.

He was a Spanish painter and printmaker, framed in abstract expressionism.

José Guerrero studied with the painters of Granada until 1928. After the war, in 1940, he went to Madrid to study at the San Fernando Academy. Later he went to Paris (1945), where he became acquainted with the work of the European avant-gardes, especially Spanish painters such as Picasso, Miró and Gris.

In November 1949 he moved to the United States. The painter adopted American nationality in 1953. After more than 16 years in the United States, he returned to Granada in 1966. Frequent visits are made to Víznar, where Federico García Lorca (his great painting, La brecha de Víznar, was assassinated) of 1966, testifies to this).

Guerrero's works are exhibited at the Guggenheim Museum in New York, the Museo Nacional Centro Nacional de Arte Reina Reina Sofía (Madrid) and the Museo de Arte Abstracto Español (Cuenca). In Granada there is an art center called José Guerrero, inaugurated in 2000, with collections belonging to the family.

She went down in history as a liberal heroine.

He was born in 1804 in Granada and died in 1831. His life coincided with a very convulsive Spanish period. A radical power struggle between liberalism and absolutism. At the age of fifteen Mariana Pineda married Manuel Peralta; three years later she was widowed (1822).

Influenced by her husband's liberal ideas, she immediately distinguished herself for her enthusiasm for freedom, so when Fernando VIII's absolutism was re-established in 1823, she was scrupulously controlled by the state.

After the crash of liberal attempts, the authorities learned that a great liberal uprising was brewing in Andalusia and that Mariana Pineda was embroidering a flag for the insurgents. Found in her home with the flag and loom, she was jailed and quickly convicted of a capital crime. Mariana Pineda showed great serenity and unlimited value. She was interrogated many times to make her confess the name of her accomplices in exchange for her life but she resisted and was executed with the garrote.

His life was told in a popular work that was the starting point of the opera 'Mariana Pineda' by Federico Garcia Lorca which was staged for the first time in 1927 in Barcelona, ​​with scenography and clothes designed by Salvador Dalí and with Margarita Xirgu in the role of the protagonist.

Federico García Lorca was a Spanish poet and playwright.

Belonging to the so-called generation of '27, a group of writers who faced the European avant-gardes with excellent results, so much so that the first half of the twentieth century is defined as the Edad de Plata of Spanish literature. García Lorca was shot by militants of the CEDA political movement at dawn on August 19, 1936 for being leftist, homosexual and Freemason, and thrown in an unnamed tomb in Fuentegrande de Alfacar near Víznar, near Granada.

He was a Spanish sculptor, architect and painter, one of the greatest Spanish artists of the seventeenth century

He trained as a sculptor and architect in the workshop of his father, Miguel Cano, builder of large altarpieces, and in that of Juan Martínez Montañés; from 1616 he worked in Francisco Pacheco's workshop in Seville, where he learned the art of painting and was a co-pupil of Diego Velázquez.

He left Seville in 1638 and, reported by Velázquez, was called to the court of Madrid, where he was active in the pictorial decoration of the royal factories. Accused, in 1644, of killing his own wife, he took refuge in Valencia and became a friar. After obtaining the protection of Philip IV, he returned to Madrid and assumed the post of superintendent of the Cathedral of Granada.

He designed the triumphal arch to celebrate the entry into Madrid of Maria Anna of Austria, wife of Philip IV, and from 1650 he was the architect of the Cathedral of Toledo. As an architect he introduced in Spain the exuberant style of Portuguese derivation called churrigueresco and unlike many of his contemporaries, he did not blindly follow the dictates of the Baroque, but respected, in many cases, the Italian Renaissance schemes.

In 1652, thanks to Philip IV, he obtained the appointment as canon of the Cathedral of Granada, his hometown, where he spent the last years of his life: he died between 3 and 5 October 1667.