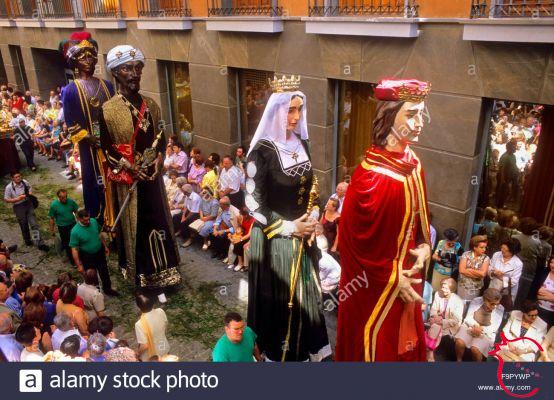 Are you in Granada on vacation and didn't know about Corpus Domini?

We give you some information about Corpus Domini in Granada that could help you in your stay in the wonderful city of Alhambra.

Corpus Domini is perhaps the biggest party in Granada!

For a week the festivities fill the city with the Granada Fair. During the Feria there are flamenco shows, puppet shows in Plaza Bib-Rambla, processions and much more. Corpus Domini in Granada is usually celebrated in June, although the exact day of the festival depends on Holy Week. You can find the date by counting 60 days from Easter Monday.

The Tarasca and the Custody

June 19th takes place the Tarasca and June 20 is the great day of Corpus Domini (procession).

La Tarasca is a very particular parade with a pagan character. It is done on Wednesday and represents the figure of a woman walking on a dragon, accompanied by giants and large heads. It is the favorite party of children. The figure of the Tarasca symbolizes the triumph of good over evil, of beauty over the beast.

The other is the Corpus Domini procession which gives the festival its name. It is solemn and religious, and leaves on Thursday. It is one of the most important days on the local calendar. Eucharistic worship is celebrated in the Corpus Domini procession. The first Custody was donated to the city by Queen Isabella the Catholic. This procession is very long, since in addition to the Custody and Tarasca, all the local and ecclesiastical authorities, parishes, brotherhoods, public and private institutions parade.

A week earlier, the Carocas they are located around Plaza Bib Rambla, near the Cathedral, so that Granada residents can read and comment on them. They are also published in the local press. These are drawings or rather caricatures, highlighting the main local and national events that took place throughout the year in terms of humor. They are accompanied by allusive verses (quintilles) which are placed under the drawing on large panels. This tradition dates back to the XNUMXth century and from the XNUMXth century onwards it was located in the Plaza Bib-Rambla.


Less known than the Feria de Abril de Sevilla, it always has great charm and appeal. In 2019 the Feria starts in Granada on Saturday 15 June 2019 and ends on Saturday 22 June 2019 with the fireworks display.

As in many Andalusian cities, the Granada exhibition center is located far from the center, as a lot of space is needed to accommodate the large number of booths installed. It's like a small temporary amusement park.

We could say that the exhibition center is made up of three parts, the stand area, the attractions area, and the entrance and access roads to these two parts, where you can find many stalls with sweets, bars, etc ...

Admission is usually free and the stands invite everyone to taste the typical dishes with which they compete every year.

The 2019 Granada Fair, as in previous years, will be located in the Almanjáyar exhibition center, Calle Casería del Cerro 25, in the north of Granada.

We just have to wish you good Corpus Domini in Granada!

Segway tour Granada: a new way to visit the city