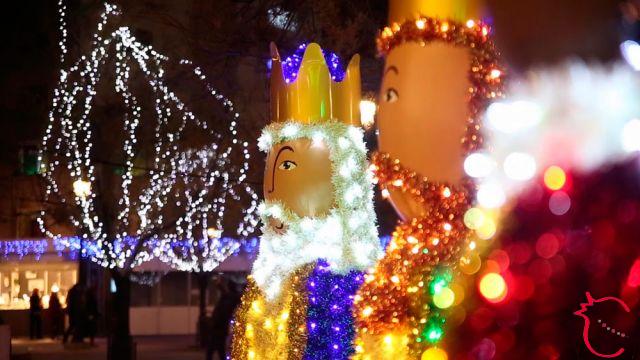 Christmas celebrations in Granada. During the Christmas season, Granada is full of lights and joy. The city is transformed.

There are many activities, shows and typical festivals: nativity scene competitions, Christmas concerts, Christmas markets with sweets from the convents of Granada, flamenco shows and parties in different parts of the city.

The Christmas and New Year holidays are a way to get to know the more festive side of the city and take advantage of the opportunities that arise in every corner.

Every year during the month of December and until the day of the Three Kings (January 6), the traditional Christmas market takes place in the Plaza Bib-Rambla. Last year this beautiful market had 70 stalls offering visitors a wide variety of products.


Here you can find the traditional figures of the nativity scene and everything you need to assemble one; different types of handicrafts (leather, ceramic, silver), sweets, wooden toys and many other things.

A Christmas market has also been set up in Puerta Real, where you can find sweets from the convents of Granada and thousands of ideas for Christmas shopping and very original gifts.

The atmosphere in the streets during these days is very happy and familiar, typical of Christmas in Granada. There are also very interesting demonstration workshops of jewelry, ceramics and much more.

It is mandatory to wear gloves.

Flamenco shows and flamenco tambourines during the Christmas holidays.

If you want to see how Christmas is celebrated in Andalusia, go and see one flamenco tambourine or zambomba.

One of these shows takes place in the Enrique Morente La Chumbera Municipal Auditorium, in the heart of the Sacromonte, and is attended by several artists from Granada. This year the Chumbera flamenco zambomba will take place on Saturday 22 December at 21pm. Cost of the ticket 00 euros.


Flamenco clubs, such as La Platería located in Albayzín, also organize their own flamenco pandereta or zambomba.

This popular festival, celebrated in Andalusia since the XNUMXth century, is characterized by its spontaneity. As Christmas approaches, groups of friends, relatives and / or neighbors gather to sing and dance Christmas carols while wine, anise, Christmas sweets, etc. are distributed.

The main instrument is the tambourine, although everyone participates with some improvised instrument, such as a bottle of anise or with the palms of the hands.

It is customary in Spain for the Municipality to organize a party in the square to celebrate the New Year.

At midnight, the town hall clock will strike twelve so that everyone present, and those at home, can eat twelve grapes together.

In Granada, the municipality organizes a large New Year's Eve party in Plaza del Carmen, with live music, fireworks and a show of lights and colors.

Cavalcade of the Three Kings (January 6)

The Cavalcade of the Three Kings of Granada is the oldest tradition in Spain, dating back to 1912.

The route is generally the same every year, they start around 17:30 from calle Gran Capitán and end the parade around 21:30 in the Plaza del Carmen, where the Three Kings, Melchior, Gaspar and Baldassarre, go up to the balcony of the town hall to greet the children.


The traditional parade of the Three Kings is a show of colored lights and music, with wonderful floats (about 20) and a procession of more than a thousand people.

With this holiday, Granada says goodbye to the holiday season.

The route can be shortened in case of rain. During the cavalcade of the Three Kings of Granada, traffic is interrupted in several areas of the city center.

As you can see, there will be many options for not staying at home and enjoying this magical Christmas that envelops Granada.

For those wishing to get out of the city and avoid the hustle and bustle and shopping, we recommend the Sierra Nevada to practice winter sports, the Alpujarra to immerse yourself in the quiet of these beautiful villages or the Costa Tropical to relax while strolling along its beaches.