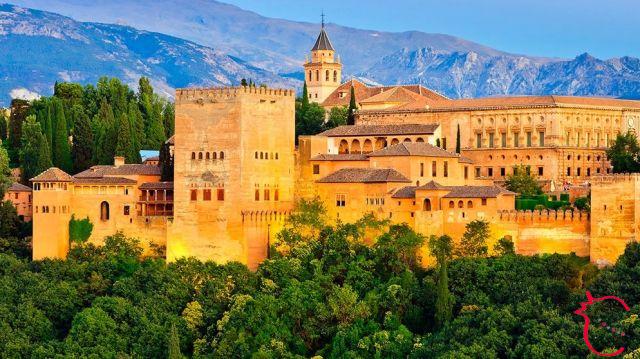 We offer you castles to visit in the province of Granada, 5 ideas for your visit to the magnificent Andalusian province.

The Castle of La Calahorra stands on the hill overlooking the Marquisate of Zenete, in the municipality of the same name, in the province of Granada.

Built between 1509 and 1512, on the ruins of another ancient castle of Arab origin, its designer is not known, but its main architects are Lorenzo Vázquez, Michele Carlone and Don Rodrigo Díaz De Vivar y Mendoza.

The castle of La Calahorra is of considerable artistic importance, being the first Spanish building in which the new Renaissance forms are introduced.

Its exterior does not have the appearance of a medieval castle, as the ramparts or corner towers are circular and not square, as in medieval times. Its walls are reddened by the dust of the Alquife mines.


The plan is rectangular and in its four angles there are two towers. It has a central courtyard and two raised floors. The only access door opens on the east wall, it is small in size, with a semicircular arch, and above it is the coat of arms of the second wife of the Marquis of Zenete, María de Fonseca.

The castle was used as a royal residence in the Nasrid dynasty, as well as a keeper of treasures and a prison for important people. It represented one of the most important Nasrid fortifications on the maritime border.

In 1489 it was donated to the Catholic Monarchs. Under Charles I, an important construction work was carried out because, at the request of the king, a series of towers and a moat were erected and artillery was supplied.

During the war of independence, the building was dismantled by the French. In the mid-1931th century it was abandoned and began to be used as a cemetery. It was declared a National Monument in XNUMX. Today it is owned by the municipality of Almuñécar and houses the historical museum of the city.

Alcazaba of the Seven Towers - Orce

The Alcazaba de las Siete Torres is located in the municipality of Orce, in the province of Granada.

The construction of the Alcazaba de las Siete Torres began in an undetermined medieval period and its precise origin is still unknown today. The Tower of Homage was built at the same time as the castle and rebuilt in the XNUMXth century after an earthquake.


The Alcazaba de las Siete Torres is in good condition, it has been restored and houses an Archaeological Museum with the remains found in the municipality. It was declared a National Monument in 1973.

Salobreña Castle is located in the village of the same name, in the province of Granada, on the western side of the top of a mountain, about 80 meters high.

The existence of a fortification in Salobreña has been known since the XNUMXth century. Although the plan corresponds to the construction built in the Nasrid period, the Arab castle is the result of the contribution of Muslim and Christian architecture.

During the Nasrid period it housed a royal palace, which was also used as a royal prison.

The castle is well known for legends and was conquered by Catholic kings in 1489. Reports from 1739 indicate that it was abandoned as it was not strategic to defend the coast.

From its towers you can contemplate Salobreña, the fertile plain, the Mediterranean Sea, the surrounding mountains and even the Sierra Nevada. It is now fully restored.

The first settlers were the Iberians, but it was with the Muslims that the city began to assume a role of importance. In 1489 the square was conquered by the Catholic Monarchs through a pact that would respect its inhabitants in exchange for the transformation of the mosque into a church. In the 1931th century part of the building was destroyed. In XNUMX it was declared a National Monument.

A curious aspect of this citadel of Granada is its characteristic reddish color due to the material used for its construction. This material was used extensively in Muslim defensive works.

In the XNUMXth century, the Alcazaba de Guadix was significantly destroyed and was later restored using materials other than the original ones that are noticeably evident in some points of the defensive structure.