Want to go to a festival in Granada? A great idea! Granada is a city full of life and full of festivals of all musical genres. That's why in ForGranadaLovers we have created a list with the best festivals in Granada and that you can't miss. Let's check them out! 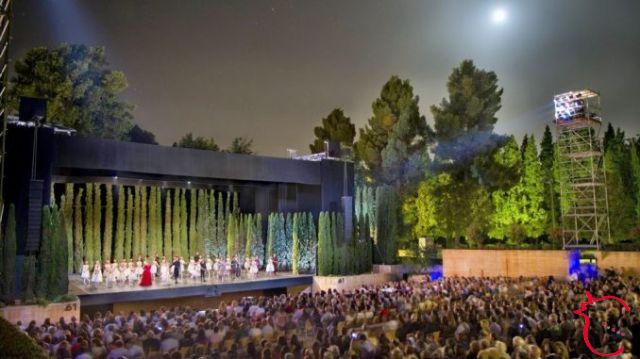 With the arrival of the good weather Granada is full of music, parties and beautiful people for all tastes. Music festivals open the summer and are a sign that the holidays are approaching. That's why going to a festival is a great way to start warming up for the summer.

Granada offers live music of all colours and forms, in short, there is something for everyone! Although the proposal is permanent, there are always new possibilities that adapt to all kinds of audiences.

In May, the festival dates start in Granada and last until September. If you have thought about visiting the city in summer, here are some suggestions.

Granada Sound comes to the city at the end of September. This year's programme features artists such as Crystal Fighters, Dorian, Carlos Sadness, Sidecars and Nancys Rubias. Granada is one of the cradles of current indie music and the most famous festival features artists from Granada such as Niños Mutantes and Andalusian artists such as El Kanka and Juanito Makandé.

The festival is held outside the city, in front of the Parque Empresarial Norte in order to welcome all the people who participate. Independent music has become very popular all over Spain and the most representative personalities take part in the Granada Sound.

The festival organizers offer a shuttle service to get directly to the venue. The ticket can be purchased on the website, which offers unlimited travel from 14:00 to 06:00. It has two lines: the yellow one stops at the Neptuno and Villarejo Shopping Centre, the blue one stops at the Palazzo dei Congressi and the Triunfo.

The Bull Music Festival starts at the end of May: for two days Granada is filled with alternative rock and rap. This year the festival was attended by artists such as Kase.O, Natos y Waor, La Raíz, Izal and even Rosendo.

International Festival of Music and Dance

With a complete change of style we come to the Granada Music and Dance Festival. It is a festival that was born in the heart of the city, in the Alhambra, with the aim of collecting and transmitting the legacy of the popular tradition of Andalusia.

It has already reached its 67th edition, lasts a week and is held in June. Among the activities are a photography workshop, classical music concerts, classical and contemporary dance performances, transhumance, ballet, theater ... In short, during the week, art and culture come together for the enjoyment of all.

Each show has a different price, but some are free.

The city also offers other options for fun. There is also a place for jazz lovers: the first weekend of July the natural site of the Chiesetta de Los Tres Juanes, in the municipality of Atarfe, hosts the Jazz del Lago Festival, which is becoming more and more popular every year.


The festival hosts personalities of the national and international scene and organizes two evenings of great artists, such as Kenny Garrett Quintel or Sergio Pamies Quartet. Admission costs 10 €.


And, of course, flamenco also has a special place in Granada's festivities with the Flamenco Festival in honour of Tío Miguel. Two days dedicated to this art where you can appreciate the specialities of singing, guitar playing and dancing. Miguel Montes Neiro was a flamenco lover. Originally from the Albaicín, he has dedicated his life to transmit the importance of music "well done". The festival commemorates the work of Tío Miguel, responsible for the diffusion of flamenco.

For a more refreshing programme, we propose the Rosco di Loja Festival. With a 'pool party' that can be enjoyed in the swimming pool of Loja, accompanied by indie and electronic music. It takes place in June in the Estadio Municipal Medina Lauxa. Entry costs 15 €.

Granada's parties are suitable for all audiences and all budgets. Summer in Granada is full of music and beautiful people to live with the people you love the most.

How to get around Granada ❯

The 9 most famous traditions of Granada