Baza, the largest municipality in the province of Granada 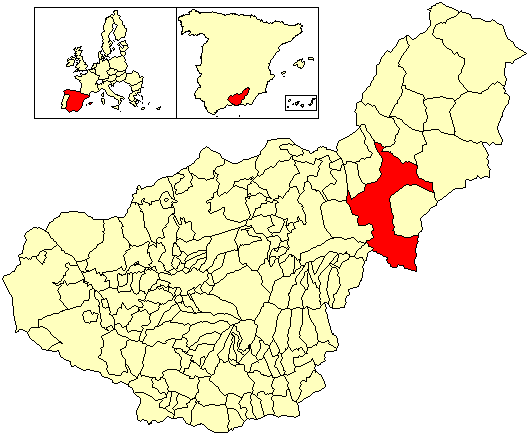 If you live in Granada or are visiting Andalusia as a tourist we suggest you visit Baza, the largest municipality in the province of Granada

Baza is the largest municipality in the province of Granada and houses the Archbishopric of Guadix-Baza.

Thanks to its history it has numerous archaeological sites and monuments of great historical and cultural value such as the Iberian-Roman city of Basti or its two necropolises, in one of them the Lady of Baza was discovered, a statue dating back to the XNUMXth century BC ( Go to paragraph).

Baza is surrounded by very varied landscapes such as the Sierra de Baza, declared a Natural Park in 1989, thanks to the mountains of 2.000 meters, the semi-desert lands and the green oasis of Vega.


This wonderful natural environment offers the visitor various opportunities to practice sports (such as trekking, mountain bike, free fly for the more daring) and to stay in one cave (traditional cave) to fully enjoy an authentic experience in contact with nature.

Founded by the Ibero people of the bastetanos in the XNUMXth century BC with the name of Basti, Baza experienced its maximum splendor in the Iberian period, being the capital of Bastetania (a very large territory between eastern Andalusia and the south-east of Murcia-La Mancha).

Under the Roman Empire it became an important commercial center and in the year 713 it was occupied by the Arabs who gave it the name of Medinata Bastha and it became a fortified medina.

The current Santiago district (the old ghetto), which has the best preserved public baths from the Arab period (XNUMXth century), dates back to the Arab period.

From the 1234th century the city was the home of the Almohades until in XNUMX it was conquered by Ibn al-Ahmar, the first Nasrid king of Granada and reached its maximum splendor during the reign of Muhammad V, in the mid-XNUMXth century.

It lost importance due to the war instability of those years until, after two consecutive military campaigns and more than seven months of siege, it fell into the hands of the Catholic Monarchs on 4 December 1489, or the day of Santa Barbara, patron saint of the Bastetanos.


Years later the Arabs were expelled and it was repopulated by new settlers. From the XXVII century, the city entered a period of hibernation from which it recovered little by little.

The Lady of Baza is a famous example of sculpture, the work of the Celtiberian people of Bastetani.

It is a female figure with traces of polychrome painting. The sculpture was found on July 22, 1971 by Francisco José Presedo Velo, in Baza.

It was found in one of its two necropolises (the Cerro del Santuario), having been an Iberian-Roman city in ancient times.

The figure is seated in an armchair and, from the presence of an opening on the back of the statue, it is thought that it could have contained the ashes of the cremation of the person represented.


Given the representation, the time and the place of discovery, some scholars link it to the more famous Lady of Elche.

Following the restoration and conservation work, the sculpture was placed in the National Archaeological Museum of Spain in Madrid in the same room as the Lady of Elche and the Lady of Ibiza.

It is worth mentioning the typical porridge cakes, gurupina (cod with potatoes), testuz (bean and green bean stew) or gurullos with partridge or hare.

In addition, it has an extensive pastry tradition, torrijas, croquetas de chocolate, bienmesabe or Christmas sweets.

Generalife Gardens: timetables, prices and how to get there ❯

add a comment from Baza, the largest municipality in the province of Granada