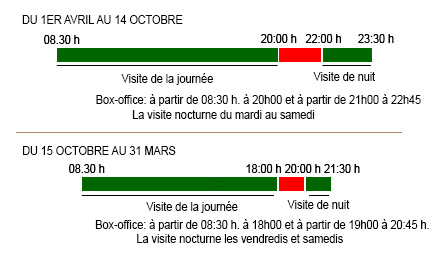 THEAlhambra of Granada, built starting from 1238 and completed by the Nasrid sultan Muhammad V during the following century, it is the most emblematic monument ofAndalusia, and one of the most significant of all Spain, but above all it is without a doubt the mirror of the fragile and magnificent soul of Granada. The Alhambra is a spectacle for all the senses, and has the gift of projecting the imagination of those who visit it into another dimension, that of the romantic and adventurous, warlike and loving arabesque dream: you will realize it by entering the finely decorated rooms gods Nasrid Palaces - the royal residences of the Nasrids - or climbing the miradores of the defense towers, soaring on the imperious red walls of theAlcazaba, overlooking the panorama of Granada and the Sierra Nevada.


Buy skip-the-line tickets to the Alhambra on Getyourguide

Buy ticket jumpers for the Alhambra on Ticketbar

You will experience the timeless beauty ofAlhambra strolling along the flowery paths of the gardens of the Generalife, you will be captivated by the water games that gush into the pools and flow along the channels, mesmerized by the sophisticated finishes of the arches that are reflected in the pools, by the lush gardens, the labyrinths of hedges, the patios full of priceless details. Never as in this case, however, words are useless: who would be able to tell the flow of images and thoughts that pass in the eyes and mind of those who enter the Moorish heart of Granada? The New York writer Washington Irving tried it, who, during his stay in Granada in the XNUMXs, wrote the Tales of the Alhambra, stimulated by the literary aura that pervades the mysterious rooms of the palace.

Alhambra of Granada: what to see

I have already told you what the wonders of the Alhambra in Granada in the article on what to see in Granada, but it is useful to remember how the main attractions are divided:

Alcazaba and Palace of Carlos V

THEAlcazaba it is the ancient military area of the Alhambra, the defensive stronghold of which the ramparts and some towers have come down to us, while the Palace of Carlos V (which also houses the Museo de la Alhambra) is a Renaissance palace that the Catholic king had built in 1526. A complete visit of these sections includes:

Here are our articles dedicated entirely to the Alcazaba and the Palace of Charles V.

The refined arabesque rooms of the Nasrid Palaces are undoubtedly the main interest of the visit to the Alhambra. The entrance to the buildings is bound, as we have said, to the time slot indicated on the ticket. Here is what to see during the tour of these spectacular environments:

As you can see above, each of these areas deserved our own in-depth article: I invite you to read them to find out more!

I Alhambra gardens (Generalife) offer some unforgettable views, which give us an idea of ​​what the idle life of the Nasrid rulers must have been like. In this area of ​​the Alhambra, visitors also have the opportunity to recover from the strain of visiting the palaces.


Here's what to see:

Don't miss our in-depth study on the Generalife of Granada!

Alhambra of Granada: timetables and useful information for organizing a visit

First of all, one must remember that a visit to theAlhambra it is something not to be underestimated, from any point of view. Here are the opening time:

Here are some useful information and advice to the organization of the visit:

Our tips for staying near the Alhambra

In what order should you visit the attractions of the Alhambra?

The recommended order of visits depends on the time you are expected to enter Nasrid Palaces: before and after the time slot in which you will visit them it is necessary to distribute the tour of the other areas. If you enter the ticket office, unless the deadline for visiting the Palacios is running out, use this criterion:

If you enter through the Puerta de la Justicia, visit the attractions of the Alhambra of Granada in this order:

In case your visiting hours to the Palacios are close to your entrance to the Alhambra complex, reach the entrance of the palaces as soon as possible: it takes 17 minutes to walk from the ticket office and, on holidays, the queue could jeopardize your plans. There Gate of justice instead it is very close to the Mexuar of the Palacios, but you will find out everything you need to know about this and other doors of the Alhambra in our article dedicated to the “minor” buildings of the Alhambra.

Alhambra Tickets: where to buy them?

As you will have understood, the risk of spending a lot of time in line at the ticket office - if not of stay dry-mouthed! - is around the corner, and there visit to the Alhambra it could be lethally affected. There are many things to see and, if you don't prepare properly, the tour risks becoming a race against time! Not to mention the worst prospect, which has happened to some of my friends, which is to leave Granada without visiting the Alhambra!

The absolute best solution, as well as the one recommended by the organization, is that of book your tickets for the Alhambra well in advance (it is possible to do it up to three months before), so as not to risk being left empty-handed and so as to choose the most convenient time for visiting the Palacios. Keep in mind that from 1 October 2017 the tickets for the Alhambra are nominative: for entry it will therefore be necessary to present a identity document. You can buy i Skip-the-line tickets to the Alhambra on a reliable site in Italian, by clicking on the button below.

Buy skip-the-line tickets to the Alhambra on Getyourguide

Buy ticket jumpers for the Alhambra on Ticketbar

If you cannot find the tickets for thegeneral admission, you can buy theAlhambra Card, which ensures theentrance to the complex last-minute even if availability is out of stock elsewhere. The cool thing about this product is that it includes entry to many other paid monuments of Granada. Here they are in detail:

Tours, packages and guided visits to the Alhambra

Below, however, I point out a few tower e packages interesting that, in addition to the entrance ticket, include in the price other useful services, which can greatly facilitate your visit:

Learn more about the tour

Learn more about the tour

More information on the guided tour

More information on the tour with GPS audio guide

After all this information, all that remains is to leave the world of dreams and walk up the hill ofAlhambra of Granada, that awaits us with its unfathomable mystery, a secret that not even a writer could dissolve with the words at his disposal.

What to see in Alhama de Granada, an Arab joy ❯

add a comment of Alhambra: tickets, timetables, tours and information for the visit